Citrus is one of the most important fruit crops in the world, and they are particularly susceptible to postharvest damage before they reach the market for fresh consumption after storage. Green mold caused by Penicillium digitatum is considered to be the main postharvest pathogen of citrus fruit with up to 60–80% decay under suitable environment conditions.

Fungicides such as imazalil, thiabendazole, prochloraz, and their mixtures have curative action, controlling pre-existing and subsequent infections. Unfortunately, fungicide-resistant P. digitatum strains have been widely detected in the field after long-term intensive application of fungicides.

Controlling postharvest diseases through the application of traditional chemical fungicides can pose a marketing issue in countries or with buyers who limit or entirely reject their use. Concerns about environmental contamination, and human health risks, drive the need for alternatives for the residues from conventional fungicides. These reasons have motivated further researches to develop new antimicrobial agents as alternative approaches. 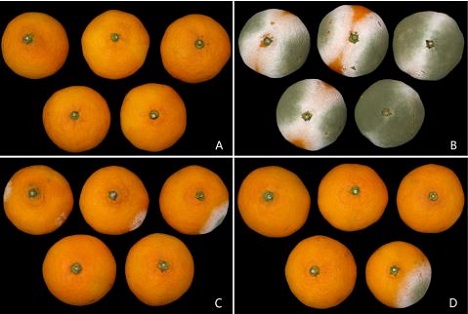 Scintists at Huazhong Agricultural University (Wuhan, China) have obtained a new strain with potent biocontrol activity to control green mold of citrus, and it was characterized as Bacillus sp. w176 by physiological, biochemical, and 16S rDNA analyses.

"Cell-free supernatant (CFS) of strain w176 in PDB (Potato Dextrose Agar) culture was analyzed by Liquid Chromatography Tandem Mass Spectrometry (LCMS/MS). There were more than four different groups of possible metabolites including macrolactin, bacillaene, mycosubtilin, and surfactin. Additionally, both Bacillus sp. w176 and its CFS could effectively reduce disease incidence and lesion diameter of green mold of citrus in vivo. Bacillus sp. w176 and its CFS reduced green mold by 89.3% and 54.46%, respectively. Moreover, both Bacillus sp. w176 and its CFS could similarly inhibit the expansion of green mold on citrus with similar effect compared to the fungicide prochloraz after three months of storage - explain the scientists - Transmission Electron Microscope examination showed that subcellular structure of P. digitatum was changed involving vacuolation, when it was incubated with CFS. Gene expression analysis indicated a change in redox and ribosome biogenesis stress-related genes transcript levels, when P. digitatum were treated with CFS."

The study has showed that both Bacillus sp. w176 and its CFS might be valuable for disease control purpose. It may provide a novel biological agent to control the citrus green mold and improve the comprehension of the possible biocontrol mechanisms of strain w176.