In the last years, netting has been widely used to protect apple fruit from solar injury. However, there is little information on the biochemical aspects underlying the effectiveness of netting against sunburn in apples. 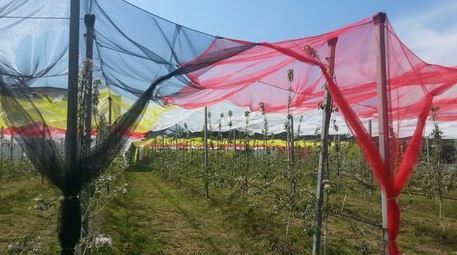 Scientists at Facultad de Agronomía of Universidad de Concepción (Chillán, Chile) have quantified the effects of netting on bioactive compounds in apples with different sunburn degrees in terms of fruit peel color variation.

For the study, orchards of Gala Brookfield and Fuji Raku Raku apples covered in red and pearl nets (providing 20% shading), respectively, were compared to uncovered trees as control. Spectral light transmission was measured under the nets from 350 to 1700 nm. Photosynthetically active radiation (PAR), ultraviolet radiation (UV), and fruit surface temperature (FST) were evaluated from 20 to 175 day after full blooming.

Red netting increased the amount of red (600–700 nm) and blue (400–500 nm) wavelengths of the visible spectrum. Both red and pearl nets reduced infrared (900–1700 nm) transmission by 8%, resulting in a decrease around 5°C in FST. Similarly, PAR radiation was reduced by 25 and 21% on average, while the reduction in UV radiation reached 29 and 25% with red and pearl netting, respectively.

"Our results suggest that sun protection provided by netting result in changes in the composition and antioxidant capacity of fruit peels, whose response varies depending on the cultivar and type of net used", say the scientists.

Study has proved that nets used for sunburn control can differentially affect the antioxidant profile of apple peel.