VTA: Dutch onion stock at about the long-term average

In the first week of February, the VTA carried out the second onion stock inventory in the Netherlands. This was done among this Dutch growers association's members. It was for the 2019/2020 onion season. This mid-season survey resulted in some conclusions. 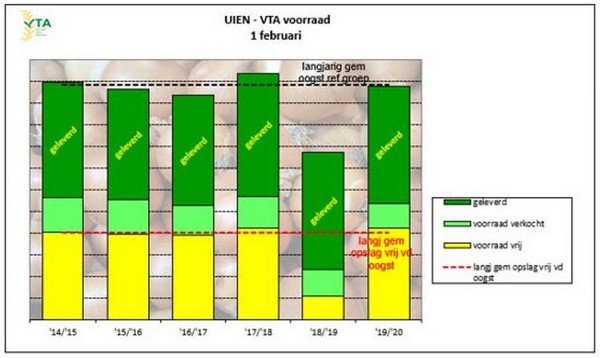 In absolute tons, VTA members' stock is at almost the long-term average level. That means a correction had been made for the previous onion season. In that season, the average was very much lower because of the dry weather. Of the season's onion stock, 22% was sold by 1 February.

That is quite a lot lower than the previous normal seasons. Usually, 25 to 28% of the onions are sold by that date. There is a difference between red and yellow onions. Of the red onion stock, approximately 34% has been sold. With yellow onions, this is 109%.

There is, therefore, a little more total free stock that stock inventories long-term average at this point. Here, these volumes are slightly lower for red onions than yellow ones.