Fight against Huanglongbing in California

A quarantine to try to stop the spread of a citrus disease that has no cure expanded in January into Redlands. Part of San Bernardino is now under quarantine as well, as is more of Moreno Valley and Colton, and the entire city of Loma Linda.

Inside the expanded quarantine zone, Redlands resident Kathy Behrens has filled a stand with citrus from her grove for more than 15 years. “These stands are part of our city’s character,” Behrens said. “It would be a shame to lose them. It would be more of a shame to lose the few remaining groves that we have.”

The 51-square-mile quarantine area, which also includes parts of Riverside and Jurupa Valley, was expanded after Huanglongbing disease was found in two residential trees in Colton.

The disease has been spreading in Southern California since the first infected tree was found in 2012. More than 1,275 square miles in several counties are under quarantine, including parts of Corona, Norco and Chino that were added around the beginning of the year.

While the disease does not pose a threat to people or animals, it has devastated millions of acres of citrus in the United States and beyond. 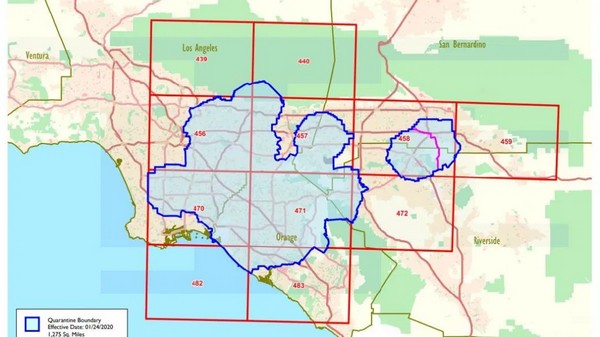 Redlands citrus
Four groves owned by the city of Redlands are within the new quarantine zone, but “fruit harvested from city groves within the quarantine area can still be packed and sold after additional treatment at the city’s packing house,” city spokesman Carl Baker told redlandsdailyfacts.com.

Behrens, who is a member of the Redlands Conservancy’s citrus preservation committee, called the disease and quarantine a “terrible issue for our city” and would like to see Redlands take more action, such as mandatory spraying, to control the psyllid.