“Delicate phase for the garlic market”

“The garlic market is in a delicate phase. For five weeks now, the imports from China have been completely blocked because of the coronavirus, which leads to great confusion on the global market. Spain and Argentina want to take advantage of the situation by raising prices, but not everyone is ready to increase their prices,” reports Bruno Volonteri, general director of CondiFrance. According to him, the situation will remain complicated until the beginning of the new harvests in China and Spain, expected in May/June 2020.

“When the Chinese resume exporting, the vast majority of these volumes will be absorbed by Brazil, North America and southern Asia. This could be positive for the next European campaign. On markets where the supply is weak in terms of quantity, prices will be higher for the producers.”

Bruno adds that the French market is rather calm at the moment. “We had strikes for over 40 days and this slowed down the market significantly. The European market is not euphoric either, as usual in winter.”

CondiFrance in figures
CondiFrance was created in 2004 to market, produce, import and export condiments. Garlic represents 55% of the volumes and 80% of the revenue. The company also offers onions, shallots and eschalions. In total, the company sells 5,200 tons of products per year. 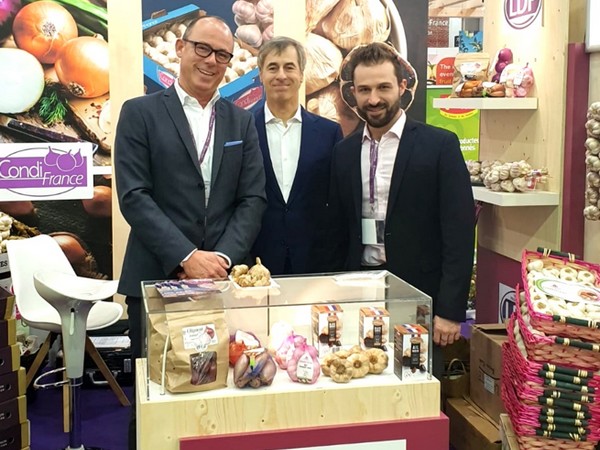 Production and client typology
Over the years, CondiFrance has become increasingly involved in production. “We started with contracts with producers in France, Spain and Argentina,” reports Bruno. “It is difficult today to import garlic from Argentina, given the large quantities of Spanish garlic available on the European market. But these off-season imports used to be ‘very favorable for the appreciation of the French production and for maintaining high prices for the producers.”

In 2018, the company joined the producer cooperative Maitre Prunille, specialized in plums, prunes, soft and dried fruits. “We are very satisfied with this closeness and development. The complementarity of our activities allows for interesting synergies and daily cooperation.”

Currently, 75% of the CondiFrance products are sold on the French market. The French clientele consists mainly of wholesalers, but the company also markets some products in the Cash&Carry niche. Sylvain Mazeaud, head of management, explains that at the export level, the clientele is more differentiated. “In export, we supply starred chefs, high-end supermarkets and delicatessen stores.”

Sylvain adds: “In Europe, our main markets are Germany, Belgium, Italy, Switzerland and Luxembourg. In large export, we also sell interesting volumes to southern Asia. Additionally, CondiFrance wants to grow on other markets, such as Canada and the Middle East.

The wooden box “Les Grands Condiments”, best-seller of the CondiFrance range, and the 100% French black garlic produced by CondiFrance, a 2020 novelty.

Original products and eco-responsible packaging
For CondiFrance, product presentation is very important. “We offer quality products, and it must be visible in the packaging as well. Moreover, there is the zero plastic trend to which we must respond. Luckily, we often used wooden and cardboard packaging already.” The wholesale market, heart of the CondiFrance clientele, has already been aware for years of these constraints and favors bulk packaging, using very little plastic.

Bruno highlights that almost no machine is used for the CondiFrance range. “Our products are packaged by hand, respecting the local know-how from Tarn-et-Garonne (peeling, braiding, grappling). This does not stop us from making considerable quantities. As far as garlic is concerned, we manage to package 200 tons per month on average.”

Projects & perspectives
CondiFrance gave students from all over the world the possibility to get training in France, within the company. “We have already trained several agronomy students who obtained their diploma after their internship in our company. They were from China, Argentina, Morocco, and also from France. We offer them free housing during their internship. This collaboration allows for mutual enrichment through the interaction between people from different horizons, countries and continents.”

7 years ago, Sylvain was one of these young students when he came to CondiFrance, right after finishing his agricultural engineering studies. Today, he is one of the leaders of the company, representing its future. “This company allowed me to know the garlic world and to learn about company management. We have a small but very dynamic structure.”