Panama is home to the world's largest fried plantain

A fried plantain is made by slicing the plantain fruit native to the region, smashing it, and frying it twice. It is often accompanied with many Latin American dishes.

Corporate social responsibility company Impacta S.A has made history in South America after breaking the Guinness World Records title for the largest fried plantain. Also referred to as a “tostone”, this record-breaking plantain was made with help and cooperation of the Ipetí Emberá indigenous people in the local area, bringing the community together. 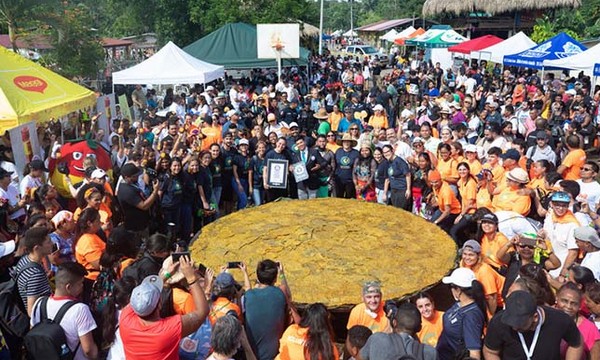 After working together to make the world’s largest, the final weight totaled to 111.4 kilograms and measured 3.5 meters in diameter. An astounding 1,200 green bananas and 1,250 liters of oil were needed to make the final product.

This event involved 134 people from the Ipetí Emberá indigenous community, 15 people from the Impacta S.A work team and 60 volunteers that actively participated in the organization and production of this record attempt.

Guinnessworldrecords.com explained how the community of Ipetí Emberá received training in cooking, tourism, recycling, crafts, security and fire prevention, as well as disposal of garbage. Upon having the record confirmed, the tribe who was heavily involved in the creation of the plantain celebrated with great joy, traditional indigenous music and dances – as this event was dedicated to highlighting the importance of the cultural richness in Panama.