The month of January was a turbulent month for plums in the Western Cape when a mid-month heatwave (40°C and over for four consecutive days) was followed by wind and unseasonal rain, reducing the Custom Plum Company’s Midnight Gold plums and FlavorFall interspecific plums. Moreover, there was rain during flowering last year, reducing fruit set.

In some areas they experienced severe loss of Midnight Gold due to the heatwave which caused internal damage. Songold volumes are also expected to be under pressure. 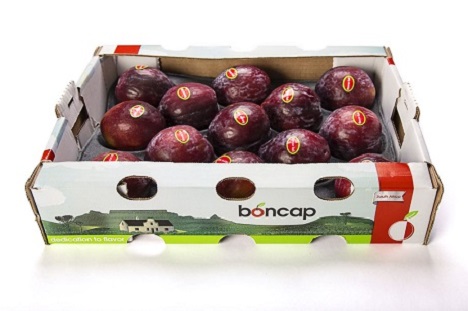 The FlavorFall crop from Ladismith in the Klein-Karoo is under further pressure due to the drought. The FlavorFall harvest is expected to start next week, an early season of reduced volumes, but sufficient to meet their important retail programmes in full.

At the Custom Plum Company it will be the inaugural season for Fall Fiesta, a red plum, and Autumn Treat, identical to FlavorFall except harvested a bit later. 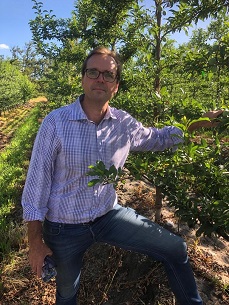 The company is a joint venture between Fruits Unlimited in South Africa and Mack in the UK, set up to grow and market Zaiger Genetics interspecific plums under licence in South African and Zimbabwe.

“Our fruit are high-tech,” says Hans Muylaert-Gelein of Fruits Unlimited (right), under whose umbrella falls the Custom Plum Company.

“Under the bonnet there’s a lot of design with the crossing between plums, cherries and apricots. You can get a premium on a product that eats well and through specialist plums we attract more consistent clients, clients with whom we can have a dialogue from week to week regarding the varieties being harvested, the sugar levels, the eating experience. In addition, better eating quality plums stabilise the market.”

Stonefruit add panache
“What I’m seeing with our retail clients,” he continues, “is that those who do it well and invest time and money in the stonefruit category, gain a following among customers. Clients increasingly go to specialist suppliers that have a specific stonefruit offering.” He mentions UK retailers like Waitrose and Sainsbury or, locally in South Africa, Woolworths as retailers amenable to unusual new products like cherry plums.

“Our clients know they’re getting something special. People want a bit of drama and stonefruit is good at that: for a few weeks, even if you don’t have large volumes, you can do a specific programme for a specific retailer.”

Furthermore, their long plum season of almost six months, starting in week 45 and ending with Autumn Treat (a new variety that is identical to Flavor Fall, pictured right, in appearance) in week 16, means that European retailers can procure their plums from South Africa for one half of the year and from, say, Spain for the other half. Transit times from South Africa further strengthen the case to look at South African plums instead of from South America.

“Stonefruit makes up 15% of our total business and there is growth on stonefruit, although the last two years have been difficult because of the drought.”

Hans notes that the simple price mechanism of lower volumes equal higher prices has to a large degree fallen away, both because retail trade stabilises prices and they don’t do much wholesale business anymore, but also because the world has become so well-supplied with fruit and there are more supply alternatives when, for instance, there a plum shortage from South Africa.

Plums make up around 80% of South Africa stonefruit exports, and this year an 8% increase in exports is predicted after a very difficult period in which certain areas, notably the Klein-Karoo, have almost fallen away due to their drastic drought.

Fortunately, the same rain in late January that reduced plum export packouts in the Boland, also brought rain to Ladismith in the Klein-Karoo, filling up streams and farm dams that had been dry for four years, a “hypnotic” experience to have witnessed, notes Fruits Unlimited’s recent newsletter. However, plum orchards sustained water stress damage that will take years to overcome.

Long road of commercialisation
Commercialisation of new plum varieties is a long and ongoing process (Hans notes that they’re always looking for the perfect, problem free plum) starting with identification of potential varieties in the Zaiger orchards in California, followed by two years of quarantine before trees can be grafted and grown.

Then there’s a three year wait for the first crop, subjected to intensive evaluation – the plum evaluation sessions at the Fruits Unlimited office in Paarl is nirvana for a plum lover – and only then can trees be established in commercial orchards. The Custom Plum Company provides technical assistance to their growers, leaning on the experiences of growers in California and Spain, but mostly learning from each other.

“While there has been a reduction in the consumption of plums, which is one of the more traditional fruit, our philosophy is that there remains a demand for plums with good eating quality and we are driven by a desire to deliver a better product.”