In 2019, US  production for the 26 estimated vegetable and melon crops totaled 739 million cwt, 3 percent below 2018 for comparable crops and States. Area harvested in 2019 was 2.38 million acres, a 1 percent reduction from the previous year. In terms of total production, the three largest crops were tomatoes, onions, and sweet corn, which combined accounted for 50 percent of the all vegetables total.

The value of utilized production for 2019 vegetable crops was $14.2
billion, up 12 percent from the previous year. Head lettuce, tomatoes, and onions claimed the highest values, accounting for 32 percent of the utilized value of production when combined. 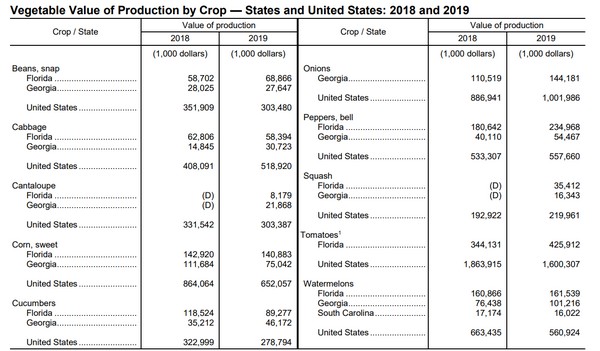