Small pistachio harvest in the US and Turkey, good harvest year in Iran

The pistachio harvest has a biennial cycle. One year there is a very good harvest ("on-year"), followed by a year with a less abundant harvest (the "off-year"). The fall in volume for 2019/20 is due to an off-year in both the US and Turkey. However, Iran has had a good harvest year, which slightly compensates for the lower cultivation volume elsewhere. As a result of the lower available stocks, world consumption, trade and closing stocks are expected to decrease. 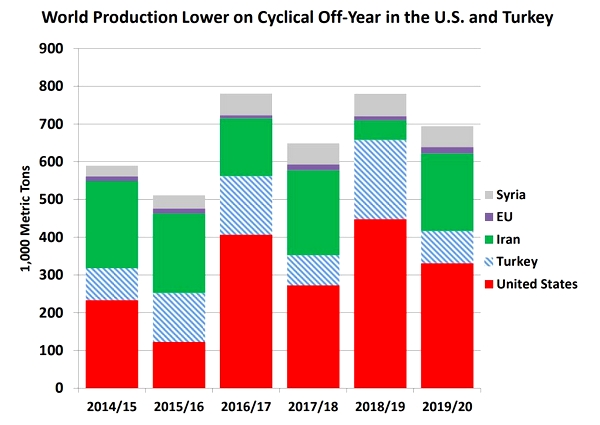 The Iran harvest, reported by the Iranian Pistachio Association, is expected to recover to 205,000 tonnes after last year's bad weather, which reduced cultivation volume by more than 75%.

Although shipments have been slow in the first months of the marketing year, it is expected that the pace will accelerate to the main markets of China, the European Union and Turkey, increasing overall exports to 125,000 tons. It is uncertain what the export to China will do, due to the limitations that the corona virus presents.

The cultivation volume in the US is expected to fall by 26% to 332,000 tonnes as a result of the lower revenue from the off-year.

With the reduced volume, exports will fall 28% to 200,000 tonnes on shipments to the top markets of China and the European Union.
The final stocks will fall to a 5-year low of only 35,000 tons, so is the estimate.

The pistachio harvest in Turkey is expected to fall by 60% to 85,000 tonnes, comparable to earlier off-years. A lower cultivation volume will have a limited effect on trade, since almost the entire harvest is consumed domestically.

Imports from China will drop by nearly 15% to 100,000 tons, established by forecasts, because shipments in the run-up to the Chinese New Year were not as many as in previous years.
Approximately half of China's total imports normally take place during this period. Given the problems with the corona virus, the question is whether there will be any export to China at all this year.

Cultivation in the EU is expected to increase by 7,000 tonnes to 18,000 tonnes coming from Spain and Italy. With consumer consumption practically the same, a drop in imports of 6,000 tonnes to 95,000 tonnes is predicted. The US supplies the majority of this to China. But here as well, it is uncertain how trade with China will develop this year.