The rains of last week mainly affected the southern zone, the Los Ríos and Los Lagos regions, where labor was interrupted at the beginning of the week. Shipments of week 6 reached 5,219 tons, partly influenced by the aforementioned. Meanwhile, the total accumulated remains in line with the previous season, around 99,600 tons.

Cbbc.iqonsulting.com reported that with respect to the destination markets, North America has received 50% of the volumes shipped up to date and 12% less than the previous season at the same week. Europe has received 34% of volumes this season and 11% more than last season, while the Far East has received 16% of shipments and an increase of 26% over the previous campaign.

In relation to the situation in China, the market activity is just returning to normal this week, with the end of the holidays on February 10th. However, the focus is on cherries, grapes and stone fruit, which have a greater volume of arrivals. 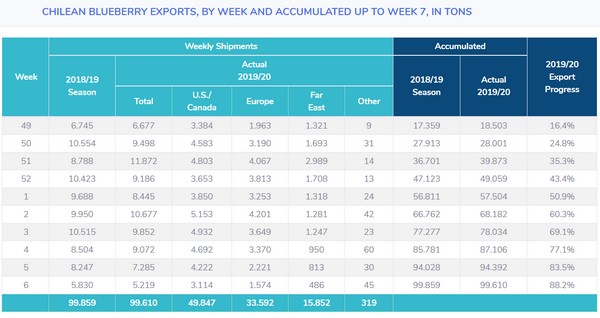 Organic blueberries continue to show a downward trend and lower weekly departures compared to the previous season. 1,008 tons were exported during week 6, 77% to North America and 23% to Europe. However, the accumulated volume remains higher with 14,042 tons exported this season, 17% more than the previous season.