Last year, Blue Whale had taken advantage of its 50th anniversary to reaffirm its engagements, share its new ambitions and change its visual identity. France’s leading exporter of apples is not about to leave the spotlight this year either. 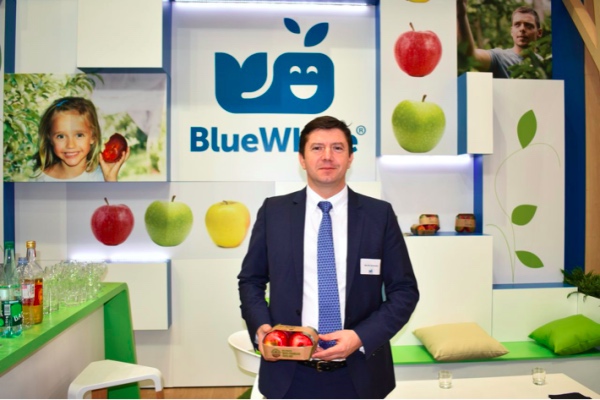 Change of direction
One departure in particular will mark a turning point in the history of the company, that of Alain Vialaret, who has been the general manager of Blue Whale for 29 years and will step down in June. He will be replaced by his assistant manager, Bruno Bertheloz.

Development of the brand image
The company will also focus this year on developing its brand policy. To do so, it wishes to get closer to the consumer, as it did during the Blue Reine® campaign in November 2019, when 100,000 apples had been graciously distributed in train and metro stations in 7 French cities. Last year, the company had asserted its commitments in terms of sustainable development, particularly in organic production and High Environmental Value (HEV). This year, it will tackle the plastic problem, with a “strong focus on packaging,” as stated by Christophe Belloc, president of Blue Whale. “Today, clients struggle to determine their expectations in terms of packaging. It is our role to offer sustainable solutions without being dictated by the trends.”

New opportunities for Large Exports
Christophe Belloc observes an opening in export towards new Asian countries like Vietnam. The  Candine® apple, for example, sweet fruit with a relatively low acidity level, seems to be getting increasingly popular among Asian consumers. South America is also a growing market. But according to Christophe, Africa is today at the dawn of a strong development, especially the eastern parts of the continent like Ethiopia and Kenya, where the living standards of the population have been increasing.