The mango - a fruit that still most often ends up in an airplane's hold. Airfreight is a niche market, which makes large volumes less attractive. EMEX is the association for mango growers in several Mexican provinces. They want to increase their volumes to Europe, and send these volumes by ship. Emex wanted to know how their mangos would fare under sail.

The association, therefore, approached the Wageningen University & Research (WUR) in the Netherlands. This facility was asked to research what happens to these fruits at sea. The study was done in partnership with several Dutch and Belgian fruit importers, as well as the Jesuit University of Guadalajara in Mexico. 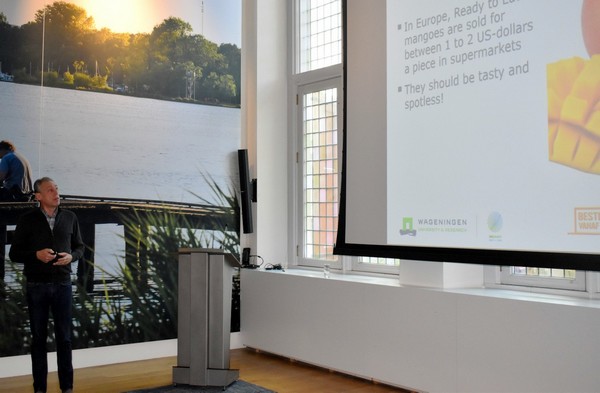 Ernst Woltering, a product physiology and quality professor, presenting the WUR at the recently held Mango Forum in Rotterdam.

Click here for the photo report of the Mango Forum

Pilot test
It was decided to run a pilot test. Several mango container shipments were sent to a Belgian importer. Each container held one pallet destined for the WUR. The fruit on this pallet were extensively tested in this facility's lab. A total of five shipments were sent. Four in 2018, and one in 2019. They were sent from various regions in Mexico. These included Michoacan, Sinaloa, and Jalisco.

It was mainly the Keitt and Kent mango varieties that were tested. These are the most popular varieties in Europe. The mangos were transported in reefer containers with temperatures of between nine and ten degrees Celsius. These containers were fitted with Ethylene-removal technology. During transport, the fruits' firmness suffered considerably, while their sugar content increased significantly.

Recommendations
The mangos were extensively tested for not only color, Brix levels, and firmness. Studies were also done to see if the anthracnose fungus formed on the fruit. The WUR set up a protocol using all this information. It laid out which conditions were best to transport mangos from Mexico to Europa.

Ernst Woltering is a professor of product physiology and quality at the WUR. He presented these research findings at the Mango Forum. This forum was held in Rotterdam on 11 February. The maximum criteria for the fruits' internal color and Brix levels were, for example, established.

When the mangos are picked in Mexico, more attention must be paid to latex spore removal. The fruit must be cooled to 10°C within 24 hours of being harvested. There must be more focus on the treatment of anthracnose fungal infections in the field must be improved too. Using post-harvest heated water treatments is crucial to combat this fungus.

Further research at the WUR focuses on, among other things, the improved temperature distribution in reefer containers. A new commercial product was recently developed for this. The OTFLOW minimizes differences in a load's temperatures. This is important. Mangos can sit in a container for up to four weeks.

That can cause differences in the ripeness of the mangos. (https://www.otflow.com/). A lot of work is being done on technologies that reduce the containers' energy consumption too. Clever use of the chiller can save up to 60% in energy. That limits the container's CO2 footprint as well as transportation costs.

Click here for the photo report of the Mango Forum