In three short months, Ms Kay Bridge has seen first-hand the extremes this Australian summer has produced; her garlic farm on the New South Wales Mid North Coast has been ravaged by both fire and rain.

Ms Bridge lives with her husband in the tiny community of Lower Creek, between Kempsey and Armidale. In November she watched the Carrai East fire sweep through her property, destroying her garlic crop; now torrential rain has seen a river of mud and rock rip through "like a freight train", inundating her shed and farmland with a thick layer of rubble.

"We need heavy machinery to get this clear," she said. "We're waiting for the rain to abate and get some machinery, but the road from Kempsey has been cut and the road to Armidale has been cut."

While the Carrai East bushfire was destructive for Ms Bridge's farming operation, her home and sheds were spared. But the devastation of the landscape made her property vulnerable to the river of rubble which was sparked when heavy rain began falling late last week. 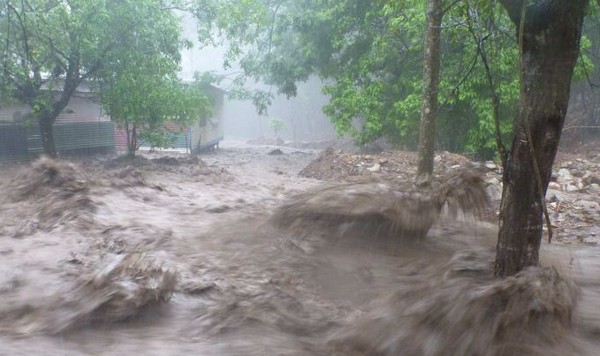 The initial downpour pushed the river of mud against her shed, but she called in a bobcat to clear some of the debris. The next downpour actually cleared some of the previous mess, but the third lot of rain early this week "came through like a freight train".

"Because there's no undergrowth to slow the flow of runoff, the rain has brought down anything that was lying on the soil as well as top soil, subsoil, rocks, it's brought down trees and washed away the roads and just inundated everything."