The Port of Oakland containerized import volume jumped 7.3 percent last month over the January 2019 totals.  Exports were up as well, Port officials said, lifting hopes for recovery from the US-China trade war. Some people however are quite unsure of the fast-spreading coronavirus, and how it could dampen trade growth.

“It’s possible,” said Port of Oakland Maritime Director John Driscoll.  “The uptick in January was encouraging but we’re hearing from shipping lines that cargo volume could moderate over the next few months.” 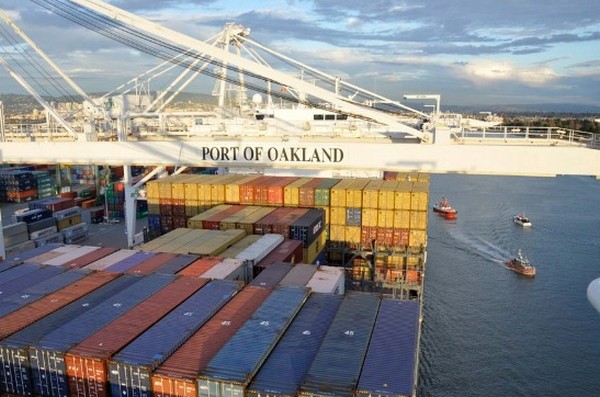 The Port’s results followed a January trade agreement signaling a break in the US tariff skirmish with China.  The agreement included a commitment by Beijing to increase purchases of US farm goods.  That was good news for California and Midwest agricultural exporters who use Oakland’s port as their gateway to Asia. The coronavirus outbreak is an unknown.

Quarantines and other emergency measures have slowed Chinese manufacturing output, according to reports.  As a result, shipping lines are canceling some springtime voyages to the US  The Port said it could take several months to determine the impact of the contagion on global supply chains.

About $6.1 billion worth of containerized fruit and veggie shipments moved through Oakland in 2017, the Port said. The volume equaled 135,000 20-foot containers.  The Port’s volume was less than 80,000 containers just four years ago.

Exports accounted for 103,000 containers of Oakland’s 2017 fresh fruit and vegetable cargo volume. Oranges and grapes are among the top exports, with Japan, South Korea and Hong Kong as leading export markets.