In general, demand was mixed: sometimes it was limited, but sometimes the customer bought more than usual. Prices mostly remained constant. In Cologne, the varying conditions of some of the stocks had a negative effect on prices. In Frankfurt, large South African Thompson Seedless grapes with a high Brix value could cost up to € 22 per 4.5-kg carton. Red offers were priced lower there due to insufficient demand. The first Indian imports are expected to arrive within the next few days. 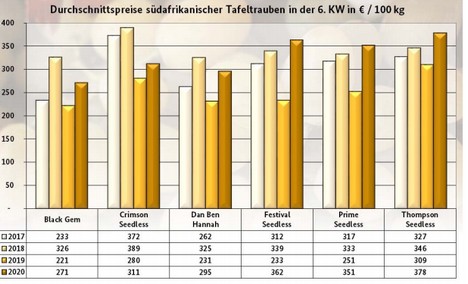 Apples
Domestic batches predominated over Italian and French ones. The supply was sufficient to meet the demand. The predominant domestic Elstar, Jonagold and Braeburn were cheaper than the Italian and French competitors, which resulted in positive accommodations.

Pears
Italian Abate Fetel, Santa Maria and Williams Christ dominated. A modest demand could be satisfied by the European products. There were no particular modifications to be noted with regard to prices.

Oranges
As far as blood oranges went, Italian Moro and Tarocco dominated. The cold season and bad weather accelerated the processing in some places, but this did not have a significant effect on the prices.

Smaller citrus fruits
Mandarins could still be accessed in an extensive scope. Spanish deliveries characterized the scenery. All in all, the conditional deficiencies increased. In addition, interest was limited in certain areas.

Bananas
The level of supply was usually sufficiently consistent with the intensity of the rather quiet demand. As a result, the distributors were mostly able to maintain the various price increases of the previous week, especially as the purchases had become a little more concentrated here and there due to weather conditions.

Cauliflower
French and Italian deliveries predominated over Spanish and Belgian deliveries. The availability increased. However, interest remained limited. So sometimes overhangs were formed which could only be reduced by means of discounts.

Lettuce
Spain had an almost monopoly on ice berg lettuce. On the one hand, supply had expanded, on the other hand, demand stagnated: the prices could not maintain their previous levels.

Cucumbers
The extremely scarce demand met with an increased availability. As a result, prices crumbled. But even this did not significantly stimulate marketing, as customers refrained from placing more orders.

Tomatoes
An extensive, varied and extensive range of products was available. However, demand had not intensified much in comparison.

Sweet peppers
As before, Spanish deliveries dominated over Turkish deliveries. In general, red products were mostly the focus of marketing. The demand could be easily satisfied.