Greenhouse from start-up company Greenloop should cost less than €1000

Basil, mint, amaranth, romana - in restaurant Bullerei in the Schanzenviertel, herbs and salads have recently been growing right behind the entrance doors, on the wall. And every two minutes the carousel, in which the edible green plants are illuminated by artificial light, rotates a few centimetres. "It's our seventh prototype," says Paul Mölders of the round greenhouse station developed over the past two years.

It is already very close to the device that may, and if all goes well, be launched in 2021. That, at any rate, is the goal of the Hamburg start-up Greenloop. "We currently have a medium double-digit number of pre-orders," Mölders told the Hamburger Abendblatt.

The software developer is managing director and co-founder of the company, in which and for which a number of Hamburg-based tech and software start-ups are active. Steff Elsner (Absolute Software) is responsible for the design, former Protonet co-owner David Burkhardt takes care of the design, and Jan Michaelis, who is behind the pay app Tabbt, is part of the team. Jimdo co-founder Fridtjof Detzner is one of the owners of Greenloop. Their common goal: to bring the cultivation of vegetables from the field to the kitchen wall. "With Greenloop, a small family can provide themselves completely with salad from their own indoor cultivation. Every week, about two to three heads of lettuce are ready for harvest," says Michaelis. 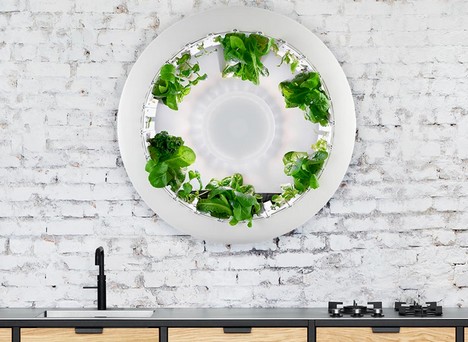 New category of kitchen appliances
With their "completely new category of kitchen appliances", the Hamburgers are taking so-called vertical farming, the production of plants under artificial conditions in multi-storey buildings in the city, to the extreme. In Hamburg, Farmer's Cut has been growing salads for years in a hall not far from the wholesale market. In some Hamburg supermarkets, herbs grow under artificial light in mini-greenhouses on several floors. Greenloop is one of the pioneers who want to make it possible to grow the greenery even in apartments without garden or balcony. The 19-centimetre deep growing station is either mounted on a stand or screwed to the wall.

Lettuce grows head over heels and is camera-monitored
You could also say that the start-up is turning vertical farming upside down. Because the plants grow upside down in the round plastic frame. The 24 planting modules in total move forward at regular intervals a few centimetres within the frame, and after two hours the greenery carousel is once around. When the lettuce is just below, the roots protrude into a mixture of water and liquid fertiliser. If the mint is upside down, the soil still won't trickle because the herb germinates in cork-like pressed coconut fibres. And the LED lights mounted in the middle of the rondel, which provide artificial light, guarantee that the plants grow horizontally despite everything.

Green Loop
"We are making the next level of technology in food cultivation available to everyone," says David Burkhardt. And the digital-savvy Greenloop makers are not stingy with technical features. The Greenloop app can be used to control the water level, dim the artificial light and optimize it for individual plants. The program provides information on how long the parsley has been growing and whether the rocket is ready for harvest. Using a camera, it is even possible to observe from a distance how the plants grow. Or whether a caterpillar has crept in and is snacking on basil.

Another aspect is at least as important to the Greenloop founders. "If the device is powered by green electricity, the CO2 balance is about half that of lettuce grown outdoors, because, among other things, there is no need for transport and no plastic packaging," says Mölders. The founders have determined this themselves, but are now having their results checked by experts. Is the whole thing a nice toy for technology freaks who already have everything else? Or is it a contribution to making the world a little better? The answer is probably somewhere in between.

When the Greenloop will be on the market, where and by whom it can be produced on a large scale is not yet certain. "We expect sales to end customers to start next year," says Mölders, and emphasizes: "We will only start selling when we can offer the Greenloop for less than 1000 euros. The already existing advance orders do not allow a production at this price yet. Now that the device has been largely developed, the company is open to investors and other shareholders, say the founders.

They want to launch a small series of the Greenloop model, which hangs in the bullpen just to the left of the entrance - and they are looking for other locations where potential tomorrow's customers will be found. The experiences in Tim Mälzer's restaurant encourage the inventors. "Since the Greenloop has been hanging there, the number of enquiries has risen significantly and interest is great," says Burkhardt. The herbs also thrive with public traffic and obviously no guest has yet secretly plucked a mint leaf from the wheel. However, the herbs are touched regularly. "People want to know whether these are real plants," says Mölders.