Washington State University scientists are intent on making new and tastier blueberries and cranberries. They are part of a $12.8 million research effort to reveal genes and valuable traits of the popular fruits.

Part of the Vaccinium family of plants, which also includes lingonberries and huckleberries, blueberries and cranberries are considered superfoods, high in antioxidants, nutrients, and vitamins, and are important crops both nationally and internationally. Washington state is one of the nation’s top producers of blueberries, growing more than a million pounds per year and ranks fifth for cranberries, growing more than 14 million pounds annually.

Blueberry and cranberry producers, however, haven’t yet benefited from advanced breeding technologies used in other crops, which limits their ability to grow new and better varieties.

That will change thanks to the $12.8 million research effort, the Vaccinium Coordinated Agricultural Project, or VacCAP, funded by the USDA’s Specialty Crop Research Initiative and led by Massimo Iorizzo, assistant professor at North Carolina State University. 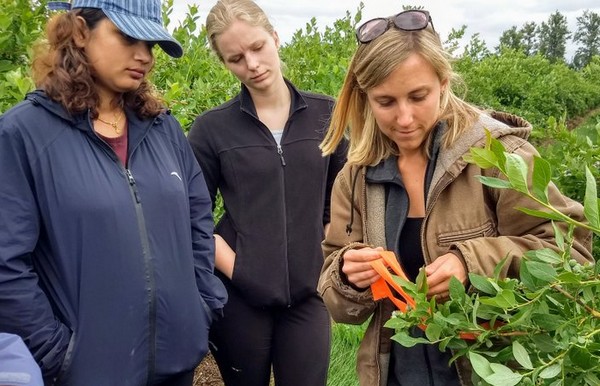 VacCAP’s multi‑state, trans‑disciplinary team of scientists seeks to improve blueberry and cranberry varieties based on growers’ and consumers’ needs.  Advancing genetic discoveries that benefit both public and private breeding programs, researchers are targeting primary traits with an emphasis on better fruit.

According to news.wsu.edu, DeVetter will lead extension activities for blueberry breeders and industry partners, sharing information generated by the project and promoting the use of advanced DNA‑based tools that help breed cultivars more efficiently.