Following a challenging start in December and January to the imported grape season, supplies are now starting to build.

“We bring fruit from Peru, Chile and South Africa and there were various challenges from all the different regions. And California finished early because of rain issues which left a short market for much of December and January,” says Larry Davidson of North American Produce Buyers based in Toronto, Canada.

However supplies are building now and Davidson anticipates volume to stay solid into the first half of March. “It should remain stable on red seedless. White seedless is going to be a real challenge this year. Chile has major water issues and as far as the North American marketplace, it’s pretty much the main area of supply for grapes once we get into the spring,” he says.

Out with the old
Davidson also adds that another challenge is the removal of older varieties such as Thompsons in Chile and the planting of new varieties such as Autumn Crisp and Sweet Globes—varieties that aren’t necessarily in production or have significant volume yet. 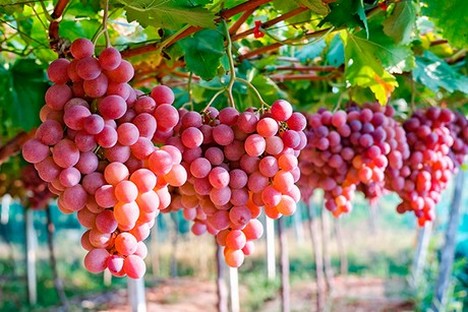 In Canada, where grapes can be imported without fumigation leading to a longer shelf life, that means the import deal can last likely through all of May. “Then people will switch based on Mexico and how things are going there,” Davidson adds.

Overall though, volumes look similar to last year. “There’s good volume starting to arrive from Chile. From South Africa, their whites are pretty much finished for the season with the exception of the later newer varieties like Autumn Crisp and Ivory and Sweet Globe,” he says. “Red seedless has a long way to go for South Africa. As Chile begins to enter the central region, volume will start arriving pretty significantly and Peru is still shipping good volumes from their second region. That should make for more than enough fruit for the next six weeks.”

Coronavirus concerns
And then there’s the potential Coronavirus factor. “With business being extremely slow in China, some varieties like Crimsons and Red Globes which traditionally go to China, if things don’t start to resolve there, they may move to other markets and the U.S. and Canada are two of them,” says Davidson. “That won’t necessarily be a good thing because there’ll be more fruit in the marketplace than the market can absorb and that won’t help marketing or pricing.”

Meanwhile demand is stable though Davidson adds that demand is slower amongst its Asian retail customers. “Other than that, business is pretty typical for a February coming off the holiday season, Chinese New Year, etc.” he says. “Typically it’s a lower time in the season for everything.”

As for pricing, Davidson says it is similar to last year and is stable. “You’ll see some swings variety to variety country to country but it’s pretty similar to last season,” he says.