Since 1970, Bill Bader has worked on peach farms in Dunklin County, Missouri, picking peaches at age 13. In 1988, he established Bader Farms. The farm grew to become the largest peach grower in Missouri, shipping fruit to grocery stores such as IGA and Walmart, as well as others across eight states in the Midwest and South.

Bader took the stand a week and a half into a trial of a lawsuit he filed against German agribusiness giants Bayer and BASF. Bader alleges that drift from the herbicide dicamba has damaged his peach trees and made his 1,000-acre operation no longer sustainable.

His lawsuit alleges Monsanto, which was acquired by Bayer in 2018, and BASF released their dicamba-related products beginning in 2015, knowing they would cause damage to other farmers.

BASF’s sales of dicamba spiked in 2016, according to documents presented Tuesday in video testimony from Nathan Borgmeyer, who was product launch manager for BASF’s Engenia herbicide.

Despite telling farmers it was illegal to spray dicamba over the top of Monsanto’s new seeds in 2016, the company sold $100 million worth of its older versions of the weed killer, compared to about $60 million annually in 2014 and 2015. The documents stated that dicamba demand spiked with the rollout of dicamba-tolerant seeds.

Bayer & BASF dispute allegations
The companies dispute Bader’s allegations that dicamba hurt his peach trees, claiming instead that the damages are due to an unrelated fungus and other natural causes. But since the release of the new products, Bader testified that his peaches, generally the size of softballs and baseballs, have grown smaller.

Dicamba was developed in the 1950s but was not widely used because of its propensity to unintentionally move from field to field. Many crops, including traditional soybeans, are extremely sensitive to dicamba.

In 2017, at least 3.6 million acres of soybeans were harmed by dicamba, according to an analysis from University of Missouri weed science professor Kevin Bradley. In addition to Bader’s case, there is a class-action lawsuit involving other farmers’ complaints about dicamba. 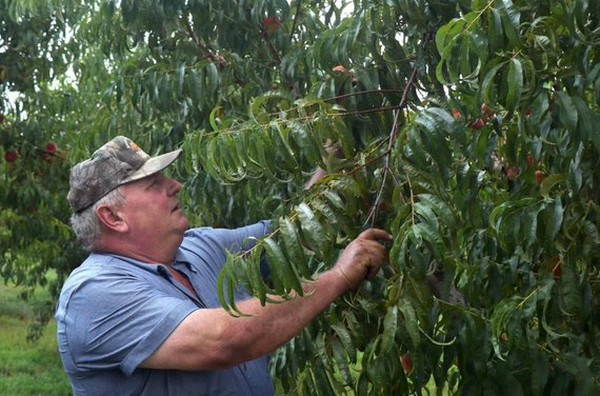 Bader testified for about an hour and 15 minutes and had barely started to discuss dicamba before the court adjourned for the day. On Monday, Dennis Cravens, a farmhand from southeastern Missouri, testified that he assisted in illegal spraying of older versions of dicamba in 2016 within a couple miles of Bader Farms.

Monsanto and BASF deny the allegations and previewed their defenses against Bader in their opening arguments last week. The trial is expected to last at least three weeks.