Gesundheit startet hier! That’s what the disinfection gel dispensers read on the IPM last week. This week the Chinese hall is pretty empty during the Fruit Logistica show in Berlin and all visitors have to fill in a declaration of health, saying that they haven't been in China. The effects of the Corona outbreak in the industry though are more broad. 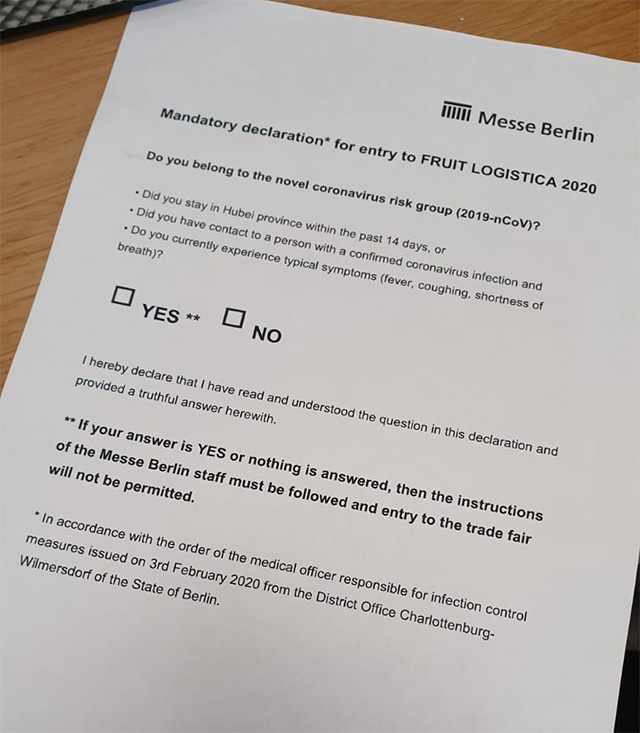 Since the Chinese holidays were extended and many flights were canceled, projects will be delayed. Due to the Coronavirus the trade on the markets has been shut down as well: with no people to do the work in the greenhouses, no logistics and no trade on the markets, the market is silent.

Right: filling in a health form is required to enter the Fruit Logistica.

Chinese projects
“As a direct result of the virus outbreak there will be some delays in projects”, says Jelmer Huizing with Codema. The company has been active in China for a couple of years and last year opened their Chinese office.

“First cause for the delays is the Chinese holidays having been extended after the New Year break. We will have to see how this will continue. Also for us as a company, we will not send any supervisors to China for the month of February and will see later on about the later projects. This is due to the unclearness of the situation and due to the flights being cancelled.”

He explains how this will affect the pace of projects being completed, but adds how this currently isn’t the biggest issue for the Chinese horticulture.

Since public life has been shut down due to the governmental precautionary measures, greenhouse workers aren’t able to go to the greenhouse. Then there’s hardly any transport and due to the public life shutting down, this includes the flower & plants and fruit and vegetable markets, where the trade is silent.

“Especially from the floricultural region Kunming we hear these stories”, he says. “Then there’s the production industry as a whole shutting down and dealing with delays. The Chinese government has already announced support for the industry to rebuild the markets, yet how big the effects of the outbreak and the support are, will depend on how the situation develops.” Codema just shipped out 1,000 medical mouth masks, from Australia, to a hospital in Wuhan. "A little token of our solidarity and support," Jelmer says. 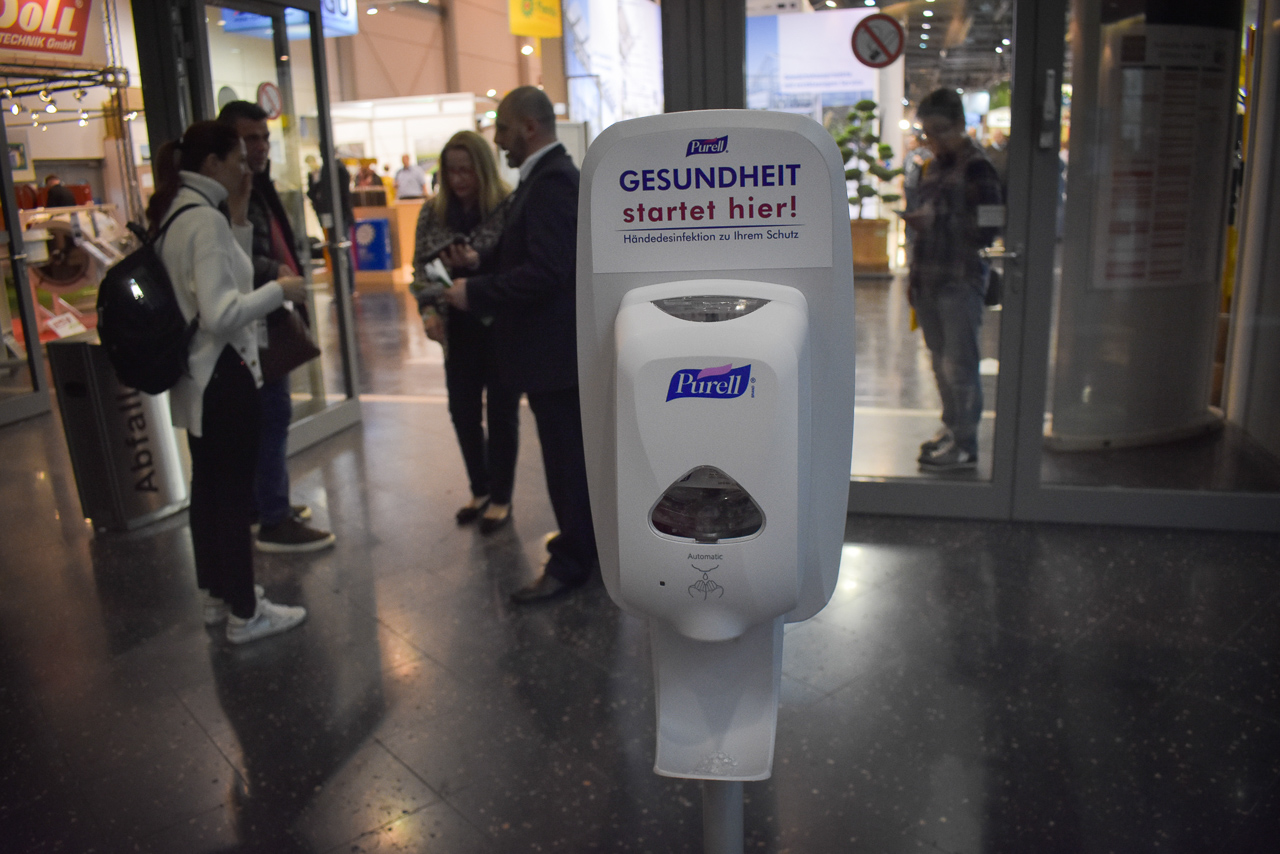 Disinfect your hands is possible before entering the IPM show.

New office
The team from Meteor Systems also had to deal with the effects of the outbreak. The company, known for their gutter and irrigation solutions, is expanding their activities in China in rapid pace currently and recently sent their first machine to the Chinese market.

“Since the holidays for the Shanghai region have been extended to February 10th and for the rest of China until last Monday, there could be delays in projects - although the exact effects will become clear in the next coming weeks. According to our Chinese colleague Junyi Xu the government does everything they can to control the outbreak”, Marc Staring says. “Yet for now we did cancel the trip to the Fruit Logistica. This is because we expect fewer Chinese companies to be present and also since it might be hard to return to China due to the canceled flights.”

He explains how the outbreak concentrates around the Hubei area, where most contaminations were found. “The rest of China, which of course is a very big country, seems to be OK for now - although the governmental measures have a big effect.”

Greenhouse companies in China have to deal with the governmental measures as well. There aren't enough workers to complete the job since the holiday is extended and the working time of the workers have to be re-scheduled. In addition, office workers are still at home. "There's a big impact on the delivery of goods and logistics", a grower from the Beijing area says.

From the sales perspective, flowers cannot be sold so they have to stop selling. Now many flower markets are shut down. Companies will have a big loss on this. Read more on how the international floral trade is impacted by the virus in this article that we've published on FloralDaily, yesterday.

Exhibition time
The horticultural industry is an industry of exhibitions and many suppliers travel all over. On the IPM Essen there were hardly any Chinese visitors - not only because of the Coronavirus and travel restrictions, but also due to the Chinese new year. This week the Fruit Logistica takes place and the organization wants to assure everybody they are doing everything within their reach to avoid spreading the virus.

The next horticultural show in Asia is the Hortex Vietnam, which will take place from Feb 26, 2020 to Feb 28 in Ho Chi Minh. Organizer Kuno Jacobs explains how Vietnam has stepped up efforts to control the spread of the virus. “Due to the new efforts from the government to control the virus, Vietnam does not issue (business) visas anymore to Chinese citizens, therefore we do not expect to have any Chinese exhibitors and/or visitors present at HortEx Vietnam.” Also measures will be taken, including the hand disinfectors and a higher frequency of disinfection of the exhibition hall.

The situation might be different for the Hortiflorexpo IPM Beijing. It is the biggest horticultural show in China and is to take place in April. Due to the virus outbreak several companies are doubting whether they will be able to and want to go. Currently, it is uncertain how the show will continue this year.

Codema and Meteor also have doubts about their attendance. “We have to see how the situation continues.” Jelmer says. “It’s too early to make a decision about it now, but since we are to exhibit there we need to make a decision within the next few weeks.” Meteor also booked a stand at the show - an event that would be their first official appearance on the Chinese market. “We’ll see how it goes. We’re just hoping for the sake of China and the Chinese people that the outbreak will be controlled soon.”