“Leveraging off the passenger airline allows us to service all continents”

Air Canada is well known as a passenger airline, but also transports a very broad range of products all over the globe. One of the product categories serviced by Air Canada is fresh produce. “We are a belly carrier, which means our air freight is transported via our passenger aircrafts,” says Carolyn van Vliet with Air Canada. “Leveraging off the passenger airline allows us to service all six continents of the globe,” she added.

“For many origins, there is a direct flight into one of Canada’s main airports.” Examples of countries that have a direct service into Canada include the US, Mexico, Brazil, Chile, Argentina, Colombia, the UK, Australia, Japan and South Korea. In addition, there now is a direct service from Casablanca, Morocco into Canada. If no direct service is available, a same-day transfer is often offered. Produce from South America can make it to Europe within 36-48 hours because of a same-day transfer option in Toronto or Montreal.

Although the airline ships almost all fresh produce varieties, air freight is mainly utilized for produce items with a shorter shelf life. “In addition, the tolerance to market plays a role,” said van Vliet. “Specialty fruit has more tolerance for air freight as it goes to market at a different pricing range,” she added. Some of the key produce items Air Canada ships by air include berries, asparagus, avocados, cherries and mangos. 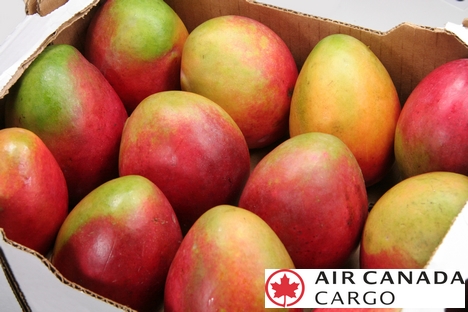 Servicing 450+ destinations
It is the airline’s goal to grow its international reach by utilizing its global network. “Not only do we have our own airplanes, we also have an extended network through the partnerships with other airlines as well as trucking companies,” said van Vliet. In the US for instance, trucking makes up a significant part of the network. Just as an example, the city of Chicago is serviced by truck out of Toronto. Altogether, the airline services 200+ destinations globally with Air Canada aircraft. An additional 250 cities can be reached by truck.

Air Canada exhibits at Fruit Logistica Berlin this week. “We will be sponsoring the Canada Pavilion for the second year,” says Rob Flood with Air Canada. The company’s booth can be found in Hall 23, A-15. At the show, airline representatives aim to create awareness for the company’s international reach as well as promote some of its new direct flights into Canada, including Quito -Toronto, Sao Paulo – Montreal and Bogotá – Montreal.