Some 8,968 tons were shipped to the different destination markets during week 4, reaching a total of 86,348 tons, similar volume than last season on the same date.

After an iqonsulting analysis of the dynamics of departures from the regions that are still in harvest and what remains to be exported, the export estimate was adjusted to 113,000 tons, 2% more than the 111,000 tons shipped last season and 2,000 tons less than the estimated of 115,000 tons for this campaign. 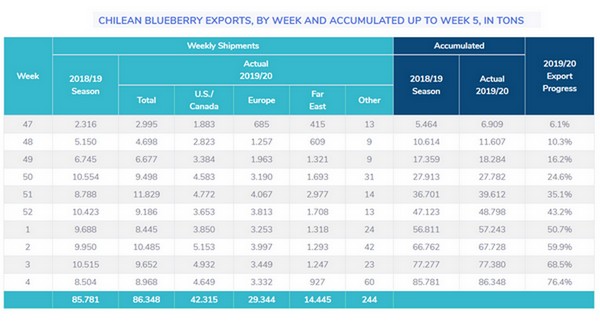 Among the factors that justify this adjustment are the weather conditions associated with high temperatures that affected the harvest dynamics mainly of the early and mid-season varieties, leading an advance in the peaks and in some cases lower volumes, which have been compensated with the greater production of the south zone, which was projected in the estimated due to the increase in the area planted.

In addition, high temperatures have affected the percentages of exportable fruit and also the industry's packaging restrictions are added, which has diverted more fruit to the seconds qualities not exportable as fresh. Although the initial estimate of fresh export was reduced by 2,000 tons, production volumes remain within the projected.

Regarding organic exports, 1,789 tones were shipped last week, 77% to North America and 23% to Europe, marking a decline from the same week last season. Even so, the total volume accumulated to date reached 11,290 tons, 27% more than that accumulated at the same date last season.