“It’s very strong right now and we’re ramping up to our annual peak in April,” says Jennie Coleman of Montreal, Que.-based Equifruit. “Our sales are up year-over-year but we always see increased demand between February and May.”

Supplies of bananas for Equifruit, which garners supplies from one producer cooperative in Ecuador and another in Peru, are also good. “Equifruit pays on Fairtrade terms (this includes respect for Fairtrade minimum prices and contribution of a social premium, both in long-term contracts) so we have no shortage of producers wanting to work with us. And so supply far outstrips demand,” she says. 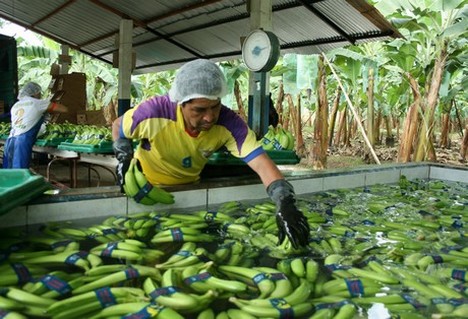 Consumption trends
The increase in sales is interesting given that Coleman describes banana consumption overall as stable. “We continue experiencing strong and growing demand for Fairtrade, organic bananas,” she says, noting Equifruit has seen double-digit growth annually since 2013. “Canadians are seeking sustainable products and Fairtrade ticks a lot of boxes since the standard covers social, economic and environmental issues. So consumption may be flat, but we observe people are making an ethical choice at the grocery store.”

To continue to meet the demand, on Monday, Equifruit rolled out its product in all 36 of Longo’s stores in Ontario. The grocery retailer began offering the bananas in eight of its downtown Longo’s locations in 2018. “It has become our largest volume partner in Ontario,” says Coleman. She estimates that Longo’s involvement represents an annual social premium contribution of some 30,000 USD in traceable, tangible impact for Equifruit’s producers, families and communities.

In addition to Longo’s, Equifruit has a number of other retail partners including Farm Boy, Sobey’s in Quebec and New Brunswick and also in Supermarchés Avril and the Paniers Lufa, also in Quebec. 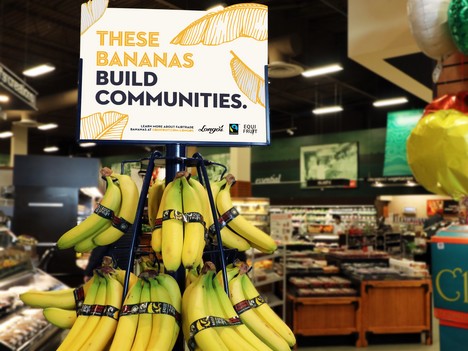 Marketing support
To support the rollout, a custom Equifruit banana stand will be in each Longo’s store along with in-store messaging about Fairtrade products and the connection between Equifruit’s bananas and farmer’s lives. Demonstrations will also be in store the week of February 24.

Yet, despite the growth the company has seen, Coleman notes that the challenge remains to convince both retailers and customers about what fair banana pricing looks like. “Bananas have traditionally been a low-cost item in the produce department. But this pricing has been based on exploitative business practices and Equifruit is trying to get that word out,” says Coleman. “Consumers respond to Fairtrade and we’ve seen tonnage go up with each of our new retail partners after they’ve put in place an ethical purchasing policy around Fairtrade bananas.”