Consorzio Kiwi Passion is established with the objective of pleasing consumers

The consortium was created on the initiative of CamFruit, represented by Claudio Dal Pane and Enza Fruit licencee for a red kiwifruit variety,  and of FruitsWorldWide sas, licencee in Europe for other two Enza Fruit-NZ varieties. The assortment currently includes two golden/red varieties (one directly deriving from the other) and a golden variety, but the consortium is currently assessing other golden, red and green selections.

The two red varieties should be available in Europe from late September to late March, while the golden variety is harvested from late October and is sold until late spring. 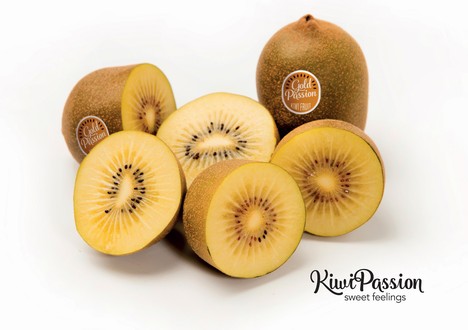 The main selection criteria are, in order of importance:

The consortium has put the experience of final consumers at the top, as all partners reported the limit experienced in the dialogue between consumers and producers when it comes to traditional green kiwifruits (cv. Hayward). This is because it is extremely difficult to supply consumers fruit at the right ripening stage when it comes to this variety. In addition, the commercial window is very short, which hinders the growth in demand.

The new varieties that Consorzio Kiwi Passion intends to commercialize are characterized by: 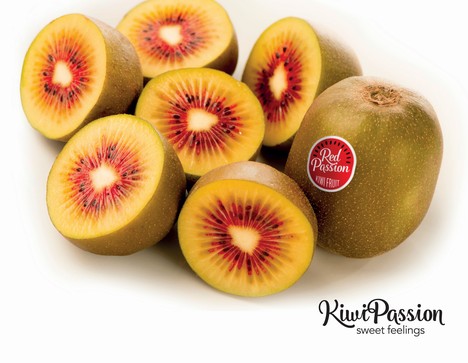 The project already aims at a European market as, among the 15 current members, there are leading operators from Spain, France, Italy and Greece. The next step is the exploration of other growing areas in Morocco and Turkey.

In fact, the low need for chill hours of these varieties makes it possible to grow them in areas unsuitable for green kiwis. What is more, the fact that red varieties need to be covered means they can be grown in relatively cold areas such as France and Northern Italy.

In addition to leading operators, Consorzio KP already counts two important commercial partners - Del Monte Italia and Greenyard Italia. They strongly believe in the project and will cooperate with the consortium to promote cultivation with expert growers and to distribute the fruit all over Europe.

In the meantime, the consortium is looking for partners in the southern hemisphere and contacts have already been made with leading operators in Peru, Chile, Argentina and South Africa.

The Consortium will be exclusively in charge with the protection of its varieties, especially since there have already been a couple of issues concerning counterfeiting.

In addition, the organization shall supply all its members with a growing protocol that will have to be adapted to the specific soil and climatic needs of the various cultivation areas as well as basic technical assistance to reach consistent excellency standards.

The Consortium will also take exclusive care of commercialization in close contact and full cooperation with both authorized packagers and the above-mentioned partners.

The official presentation will be at MACFRUIT 2020.