Kiwifruit vine decline is a complex disease. Mr Scortichini studied the etiological role of clostrida and reported that excessive rain or irrigation in soil compacted by the passing of machinery may cause temporary asphyxia conditions that activate clostridia (Gram+ bacteria, anaerobic), which in turn may lead to vine decline. 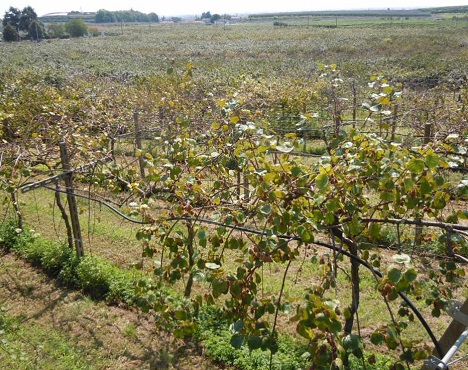 Vine decline in an orchard

The hypothesis of studying anaerobic agents for kiwifruit decline is stimulating and innovative. Eziological research within plant bacteriology is commonly aimed at finding potential agents in an aerobic environment. But there are indeed diseases where clostridia play a pivotal role. The interest for anaerobic bacteria also derives from the conviction among growers and technicians that the vine decline may be caused by excessive water during certain moments.

In fact, a temporary excess of rain or irrigation water may reduce the concentration of oxygen in the soil leading to hypoxia (low concentration in saturated soil). If the excess persists (e.g. stagnation, floods), it may lead to anoxia (zero concentration). The effect is greater in compact soils and in the period between June and September, when many soils crossed in depth by thinner roots have higher annual oxygen concentrations. Anoxia may lead to the development of both anaerobic and optional anaerobic microorganisms. Of course the transition from normoxia to hypoxia and finally to anoxia occurs gradually.

As for the roots, the end parts suffer the most due to the lower local availability of oxygen, both because of their needs following the activity of meristems and because of a lower local development of intercellular spaces. When passing from normoxia to anoxia, the plant, rhizosphere microorganisms and root endophytes have the chance to adapt. Plants alter their energy metabolism and growth regulators with local and systemic signals that condition the efficiency of the immune system. Microorganisms modify the reciprocal interactions relating to the different capabilities of adapting to stress. Hypoxia, for example, does not affect the growth of the mycelium of phytophthora, but it severely compromises the vitality of zoospores.

At low oxygen concentrations, the normoxia balance between plants and their microbiome may falter and disease may ensue if a component in the changed condition manages to express pathogenic factors coupled with a failure from the plant to actuate the usual defense barriers. All microbiome microorganisms that concur in developing the disease and its pathogenesis constitute what modern medicine defines as pathobiome. Kiwifruit vine decline can therefore be interpreted as a pathobiotic state conditioned by a prevailing environmental stress, i.e. a lasting lack of oxygen to the roots.

The main symptom that can be found in plants is root rot. Healthy plants can temporary resist anoxia (e.g. floods). However, it has been noticed that flooded avocado plants suffer more if there are phytophthora on their roots. This means that the nature of microbiome components can affect the capability of adapting to the lack of oxygen. When it comes to kiwifruit vine decline, rhizosphere microorganisms and/or root and trunk endophytes may have an important role in various environments. The benefits brought by endophytes to plants in case of biotic and abiotic stress are known.

In Veneto and Piedmont, which are constantly associated with root rot, oomycetes have been found (Phytophthora, Pythium, Phytopythium), whose pathogenicity was experimentally verified. This means that potentially-pathogen oomycetes are involved in vine decline, as found for clostridia.

While recognizing the merits of those who have contributed to a better understanding of the true causes of vine decline, etiological research should focus on the pahtobiome of plants affected by vine decline rather than on single potential pathogens. Current omics enables the simultaneous identification of all the main microorganic components of a pathobiotic consortium. The study on acute oak decline in England could be an example (Broberg M. et al.,2018, Microbiome 6:21). The severity of the decline and the prolonged etiological uncertainty make this oak disease similar to kiwifruit vine decline.

Recognizing the microorganic components of the decline is essential and, in order to tackle the problem, biological interventions to favorably modify the microbiome (i.e. the living microorganisms associated with the plants) must also be used. Applying useful rhizobacteria and/or mycorrhiza to the roots, i..e the injection in young trunks of selected endophytes, can be carried out in nurseries as well as during planting. Using resistant rootstocks may alter the microbic composition of the rhizosphere favorably. Of course, these interventions require accurate and patient experimentation.

Umberto Mazzucchi, former Professor of Plant Pathology at the University of Bologna and Professor of the Specialization Course on Ornamental Greenery Defense in Imola.