Nearly 260 produce industry professionals and family members attended the 2020 Texas International Produce Association’s Hall of Fame ceremony on Monday evening, January 27th, at the McAllen Country Club in McAllen, Texas. Every seat and every table was completely filled to pay tribute to the evening’s honorees. 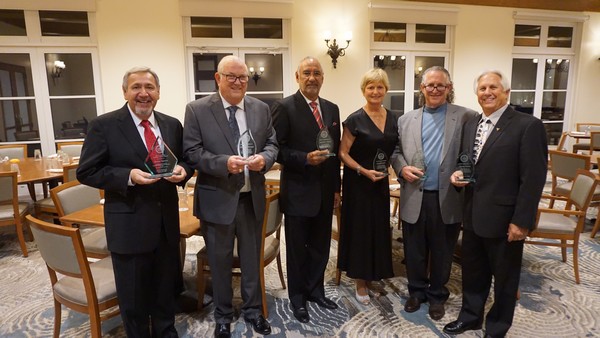 The Hall of Fame has been a regional tradition since 1988. For 32 years, the event has recognized the region’s industry leaders who have made exceptional contributions crucial to the long term success of the trade. These individuals are acknowledged as trailblazers and innovators, enduring the trials and tribulations for decades that make a life in the fresh produce world. Even more, they have been advocates and served on behalf of the industry in many different capacities, pushing for the betterment of all the region’s fresh fruit and vegetable stakeholders.

In addition, Jimmy Santos of Santos International US Customs Brokers, was awarded the Scott Toothaker Award for his many years of commitment and service to the industry.  The Scott Toothaker Award was established in 1989 to recognize those who are not directly involved in production agriculture, but who have also made important contributions to the industry’s success.

The Texas Produce Hall of Fame Committee accepts and reviews nominations throughout the year.  Bob Peterson, formerly of C&V Supply, Mission, TX, has served as Chairman of the committee since 2010.  Mr. Peterson said “It’s a privilege to be part of this industry and serving as Chairman of the Hall of Fame Committee is truly an honor.  Our biggest challenge as a committee is finalizing a list of honorees when there are so many deserving people.”

Dante Galeazzi, President & CEO of the Texas International Produce Association commented, “The Hall of Fame is always an incredibly touching and moving event. Hearing the stories of leaders who laid the foundation for our region’s success, who fought and built what we now take as ‘truisms’ of our industry, it is a wonderful chance to show our gratitude for their achievements.”

In what has traditionally been a biennial event, the next TIPA Hall of Fame is tentatively scheduled for January 2022.