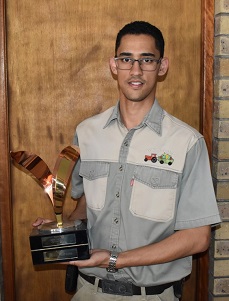 Ricard Myburgh has been managing his family’s fruit farm since 2012, fifty-four hectares in the Vyeboom area with all of the standard apple varieties of the South African apple industry and Packhams pears.

The African market has shown strong growth over the past few years for Cortina Farm and for its exporter, Fruitways, especially in Nigeria with its immense population.

They take mainly Goldens, some Pinks too, Ricard explains, and gradually the market is also developing a preference for green Goldens over a more yellow tinged fruit.

Ricard is excited about his new Lady in Red orchards, a Pink Lady (Cripps Pink) variety on which they’re hoping for better colour than on Rosy Glow which, under hot conditions, he says, sometimes isn’t that much better than a normal Pink Lady. “I’m one of the first growers to get Lady in Red trees and we’re planting it on M9 rootstock. We’re getting good tonnages and good colour, I’m confident the cultivar will pay off for us.” 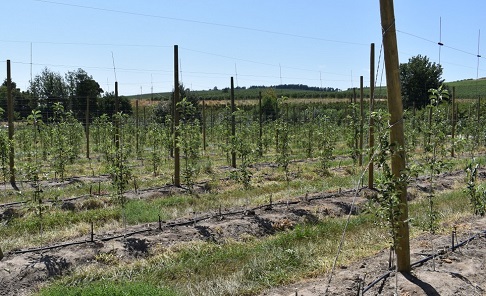 New Lady in Red orchard, planted to a tree width spacing of 1.2m

He notes that the Vyeboom area is hotter than other apple production areas closer to the coast, which has an impact on colour development.

Denser planting is the future
After a visit to some US apple growers, he came back and placed an order for M9 dwarfing rootstock, of which there is still, he says, limited availability. At Vyeboom their soil isn’t as rich as the soils of the Pacific Northwest, with underlying clay that limits root development.

He is looking at more trees per hectare and closer plant spacing, which is one of the main messages he’s taken away from visits to European and US apple growers. He’s confident that the South African industry will increasingly change more in the direction of modern apple production overseas, close spacing producing a fruiting wall, which has in turn enabled mechanisation in other apple-producing countries.

“The most profitable variety on our farm, I would say, is the Fuji, but then you need good packout with good colour, it must be a good class 1 and clean from a phytosanitary perspective, then you can get good returns for it on the Taiwanese market.”

Another dependable variety is Sundowner (Cripps Red) with high yield, good colour and long storage life. Their class 1 fruit is exported by Fruitways, while they market the class 2 fruit themselves locally.

Ricard mentions that they’ve just opened a CA room of last season’s Goldens, nine months on still looking good and it is this dependability that keeps it a dominant variety in the South African apple industry, although they’re trying to reduce it.

The Controlled Atmosphere room where 1.5 million kg of apples can be stored for many months

High fruit load on trees as water returns to normal
Over the past three years of drought they were forced to dig boreholes, like many other farmers, and they were fortunate to strike water, but 60% water restrictions nonetheless had an impact on the trees with smaller sizes, 10-15% smaller than previous years. 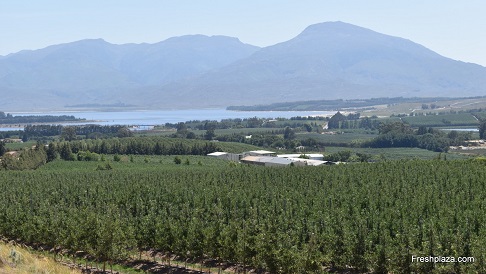 He notes that they’re including more compost and cover crops every year, coupled with trials into more biological pest management. “We try not to spray too many chemicals so that pests can fight each other out,” he says. 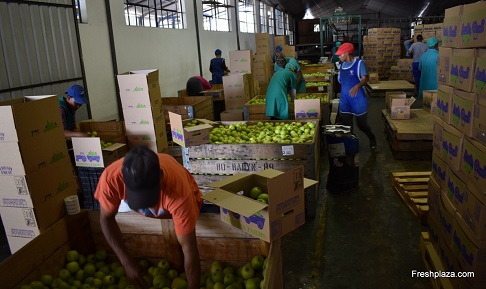 Apples for the local market are sorted and packed by hand

“I believe there’s still a great future for agriculture. You learn every day something new. It’s not something you can win, every year is different.” 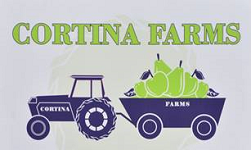