The worst outbreak of desert locusts in Kenya in 70 years has seen hundreds of millions of the insects swarm into the east African nation from Somalia and Ethiopia. Those two countries have not had an infestation like this in a quarter century, destroying farmland and threatening an already vulnerable region with devastating hunger.

When rains arrive in March and bring new vegetation across much of the region, the numbers of the fast-breeding locusts could grow 500 times before drier weather in June curbs their spread, the United Nations said.

“We must act immediately,” said David Phiri of the UN’s Food and Agricultural Organisation (FAO), as donors huddled in Kenya’s capital, Nairobi, a three-hour drive away.

About $70m is needed to step up aerial pesticide spraying, the only effective way to combat them, the UN said. That won’t be easy, especially in Somalia, where parts of the country are in the grip of extremist groups. 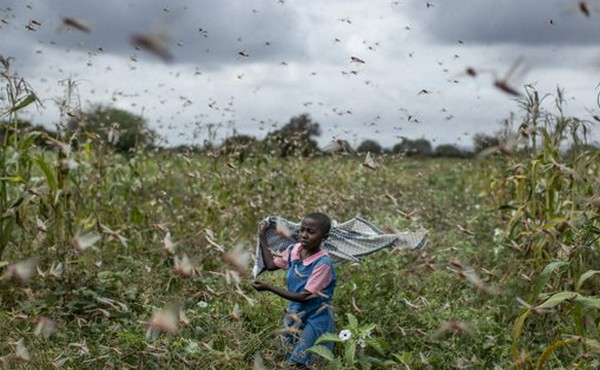 Even a small swarm of the insects can consume enough food for 35,000 people in a single day, said Jens Laerke of the UN humanitarian office in Geneva. About 70,000 hectares of land in Kenya are already infested. A single swarm can contain up to 150 million locusts per km2 of farmland, an area the size of almost 250 football fields. One especially large swarm in north-eastern Kenya measured 60km long by 40km wide.

Migrating with the wind, the locusts can cover up to 150km in a single day. They are now heading toward Uganda and fragile South Sudan, where almost half the country faces hunger as it emerges from civil war. Uganda has not had such an outbreak since the 1960s and is already on alert.

The Ethiopian Ministry of Agriculture on Friday disclosed that the ongoing desert locust invasion has affected over 65,000 hectares of land across different parts of Ethiopia during the past few months.

Among the 65,000 hectares of land that was affected by the desert locust swarms, some 58,628 hectares of the land has been freed from the dangerous pest, Zebdios Selato, plant healthcare director at the Ethiopian Ministry of Agriculture, told local media outlets.