First report of Alternaria alternata on Quince trees in Iraq

Quince (Cydonia oblonga) is an important fruit tree that is native to the Western Asia region. Currently, it grows widely in countries with moderate and subtropical ecological conditions, including Iraq.

The fruits are consumed directly or processed as jams, jellies or marmalade. Moreover, several medical phytochemicals have been identified in quince fruits that have received attention for exploitation in preventing and remedying various pathologies in humans.

In 2017, the total area harvested of quince trees in Iraq was 325 ha with total production 1.777 tones (FAOSTAT 2019). However, quince trees have been affected by several plant pathogens such as Erwinia amylovora, Sphaeropsis malorum, Venturia inaequalis and Podosphaera leucotricha causing a sharp decrease in yield and quality. In the spring of 2018, symptoms of circular to irregular dark brown necrotic spots surrounded with yellow haloes were observed on leaves particularly those old one located on bottom of quince trees of various ages in the Alhusseiniya region of Kerbala Province, Iraq. 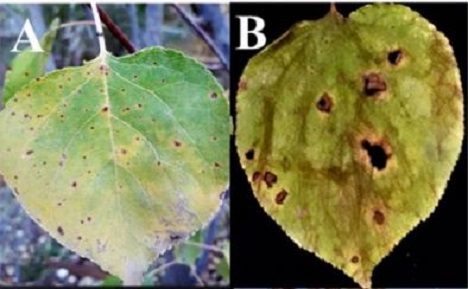 Scientists at the University of Kerbala (Iraq) have collected symptomatic tissues and isolated the fungal pathogen. The morphological features resulted similar to those of Alternaria alternata that was confirmed by molecular diagnosis with genomic DNA extraction. Also pathogenicity test supported the results. One week post inoculation, the leaves showed brown necrotic spots similar to those observed in the original symptoms, and the same fungal pathogen was re-isolated.

"To the best of our knowledge, this is the first record of A. alternata as a fungal pathogen causing leaf spot in quince trees in Iraq. However, no such a study is available that indicates to effectiveness of this disease on quality and yield of quince tree in Iraq. Thus, further studies are demanded," the scientists concluded.