Spanish Mercadona is the new prizefighter on the Portuguese retail market

In 2019, Mercadona, the well-known Spanish foodstuffs group, arrived in Portugal. The company is expanding abroad and decided to start with Portugal.

Mercadona opened its first Portuguese supermarket in July 2019 in Porto. They planned to open ten stores by the end of that year. These are to be in the cities of Porto, Braga, and Aveiro. There are high expectations in the food sector of Portuguese retail. They want to see how Mercadona's arrival will affect the Portuguese market.

The Spanish company's business model is based on having consistently low prices with no promotions. This is in contrast to the current market trends in other marketing campaigns. It will be interesting to follow Portuguese consumers' reaction to, and acceptance, or rejection, of this new player.

Several factors have led to the food retail sector devising new trading formulas. These include changing consumer habits and demographic factors such as the population's aging. Then there is the development of e-commerce, as well as new technologies.

Creative ideas are needed
The economic crisis changed the way many Portuguese people shop. They have become more rational and, so, often wait for sales and discounts. Marketing campaigns in the food retail sector carried even more weight in 2018. They accounted for 46,4% of the sector's revenues versus 45% in 2017.

This situation has forced retailers to become creative. They have to invest in strong marketing strategies. They also have to continue to make a solid effort when it comes to competitive pricing options and product differentiation. Certainly, now that the prizefighter, Mercadona, has entered the Portuguese market. 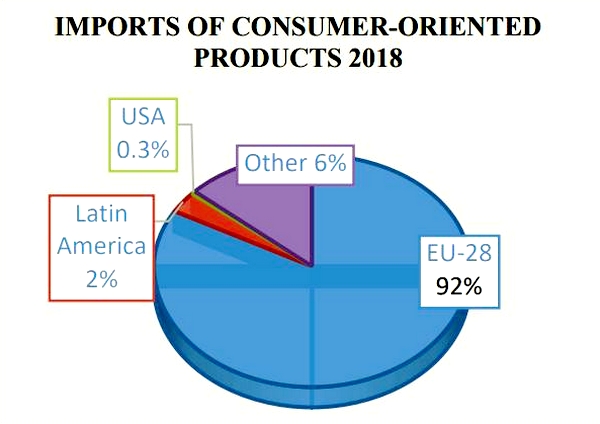 Portugal has a population of 10,1 million people. This country's economy has been recovering from a recession in recent years. This recovery is after a period of decline and austerity measures that were taken. In 2018, Portugal's economy grew by 2,1%. It is expected that this country's economic growth will slow down a little in 2019. Job opportunities and the economy will, however, keep increasing, but at a slower pace. A growth of 1,8% is being predicted for 2019.

The Portuguese horticultural sector employs 6,5% of the population. Portugal cultivates mainly olives, citrus, wine, and vegetables. Portugal is also the number one cork producer in the world. Most of this is destined for the export market. In 2018, the total import of horticultural and related products amounted to €12,4 billion. This is an 8% increased compared to 2017. Almost half of these goods are imported come from Spain.

Portugal's improved economic climate has boosted consumer confidence in that country. It has also stimulated spending, which has contributed to better retail sales. Portugal keeps getting record numbers of tourists too. That stimulates the demand for foodstuffs. In 2018, Sonae (Continente), Jeronimo Martins (Pingo Doce), and Auchan (Jumbo) were the largest foodstuff retailers. The Portuguese food retail market is highly concentrated. The five leading players claim almost 70% of the market.

Nuts
In 2018, Portugal imported €12,4 billion's worth of horticultural products. Of this, 81% comes from the EU, with Spain as the top supplier. Portugal also imports nuts:

Almonds (Import value: €23,5 million)
Top importers:  1. Spain 60% 2. USA 28% 3. 3. Germany 11%.
Spain is the third-largest almond producer in the world. The country has strong trade relations with Portugal. This is because of its geographic proximity. Spain exports large quantities of almonds to the United States. These are then processed both for use by the domestic industry and for re-export to Portugal.

Pistachios (import value: €2,7 million)
Top importers: 1. Spain 43% 2. US 38%
The production of pistachios in Portugal is minimal, and demand continues to grow.