The topic of plant protection at the Onion Forum 2020

Plant protection was a central topic at the Onion Forum 2020, which took place last week in St. Martin in the Pfalz. It could be said this is the most important of the topics for the onion industry, even considering the selection of great presentations and the concerns of the audience. There was something for everyone - from chemistry, to flaming, to flies with pink markings. FreshPlaza was there. 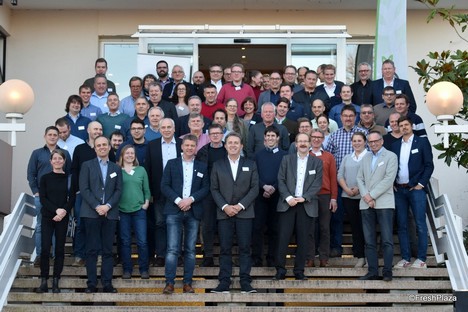 Andrea Schneider: Update on spraying
Andrea Schneider, from the German Onion Trade Association, was the first to make a plea for chemical agents. First she gave an overview with technical information about chemical pest control, its history and its legal basis. Her conclusion: "You only need very little spraying for a large area, so the process is material-saving. The amount of work is also very low. Nevertheless, in the end you will find less (or no) residues on the end product and the need for insecticides will be reduced significantly."

The wire worm in particular is a major threat to onions - this is also one of the effects of climate change, said Schneider: "Due to the warmer climate, wire worm species from southern countries are becoming increasingly successful in our country. Their progress northwards is clearly evident." These species are more invasive and more difficult to control. This should be a point of reference for future developments.

As far as the approval of new crop protection products is concerned, the research community and the authorities are "miles apart" and unfortunately there is often a lack of expertise on the part of employees to make these important decisions for crop protection quickly and case-by-case. This insight was also very well received by the audience.

Marc Muszinski: Further prospects within crop protection
This aspect was also criticized by Marc Muszinski, who spoke for Syngenta Agro at the Forum. "Unfortunately, expertise is not well distributed within the authorities, so there is a lack of a sense of what is realistically required. There is a problem of perception: the conflict between agricultural and environmental policies that producers suffer from. "On the one hand there is a demand for supply from German consumers and politicians, on the other hand there is a lack of understanding of the risks and needs that go along with vegetable growing."

There has been a drastic reduction in the number of legal active substances, while at the same time a conservative evaluation of new developments and a long duration of the proceedings. "This raises the question of how to feed humanity, with fewer and fewer protection options and increasingly adverse conditions," he says, referring to the bad mood towards politics and the demand for organic products.

This presentation also stimulated a discussion and Hans-Christoph Behr (AMI) concluded: "Everyone always says 'it won't work' but in the end it does work. There simply seems to be no clear emergency that warrants quick solutions."

Martina Pohlmann: nematodes and sterile onion fly technique
In her first lecture, Martina Pohlmann from HLB/De groene Vlieg dealt with free-living nematodes, a microorganism that is largely a beneficial organism. She presented the cases where pests are involved and talked about ways to detect and counteract them.

On the second day, she spoke about her experiences with the sterile onion fly technique, which is already widely used in the Netherlands. In other European countries, too, the old familiar method should soon be on hand, thanks to the new mobility of the flies. 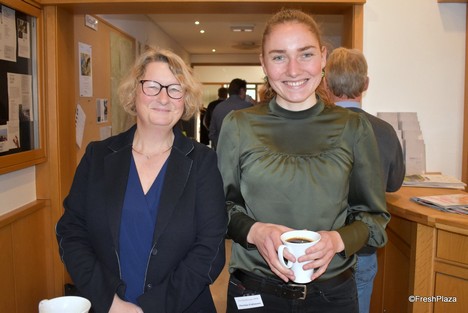 The technology is already being used in various countries worldwide for 38 fly species. The protection is provided by sterilized flies, which are bred in large quantities and released on affected fields, thus hindering reproduction. "This process does not require GMOs, does not lead to resistances, does not leave any residues and has a long-term effect," Pohlmann said about the advantages of the technology.

She explains the process: "Onion flies are bred and briefly irradiated with radioactive radiation in the final stage of growth. This inhibits sexual maturation." She says the technique is very precise and only works on a few insects. After the exact monitoring of the infested areas, these sterile and pink marked onion flies can then be removed and the reproduction can be avoided there. However, this requires close cooperation between many farmers in a region in order to make the technology effective across the whole region.

Up to now, the company has been geographically very limited, as it was not possible to transport the flies over long distances. In the meantime, special containers have been developed to facilitate this. In the long term, the company is also looking for areas in Germany and the rest of Europe where the technology can be applied.

Claude Juriens: Cleaning out weeds made easy
Claude Juriens, from Swiss company ecoRobotix, presented the company's autonomous robot for precision weed control to the forum participants on the second day. The robot works with a micro-dose application and a very precise application thanks to camera and GPS. It promises 90% savings of herbicides thanks to "spot spraying" - for the benefit of the environment and your wallet. Commercialisation is currently underway and more tests are to be carried out in Germany, Switzerland and France in 2021.

Ole Jensen: torching technology in onion cultivation
The lecture on weed control, held by Ole Jensen of Danish company Envo Dan, sounded a little more direct. The weed torch destroys weeds between the rows of onions in a targeted and chemical-free manner. The technique has already been in use in Germany for several years now. 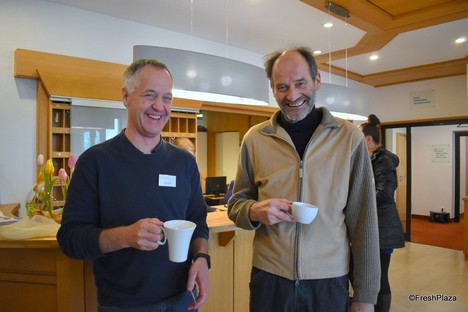 All presentations were followed by discussions and comments on the topic. The speakers reacted spontaneously and humorously to even the most critical comments. The relaxed and laid-back atmosphere was noticed by many participants as a special feature of this event.

Take a look at our editorial and our photo report on the Onion Forum 2020.