It is a big issue for all Mediterranean producing countries

"Two serious viral diseases are affecting Turkey's citrus cultivation and threatening all the Mediterranean countries". This was reported by Antonino Catara, former president of the International Organisation of Citrus Virologists.

"One of the two diseases - continued the scientist - is the Citrus Chlorotic Dwarf CCD, which mainly affects lemon and grapefruit plants, but also marginally mandarin and clementine plants. The viral infection has a significant impact on the yield and quality of the fruit, as well as on the crown's vegetative development, due to the short internodes". 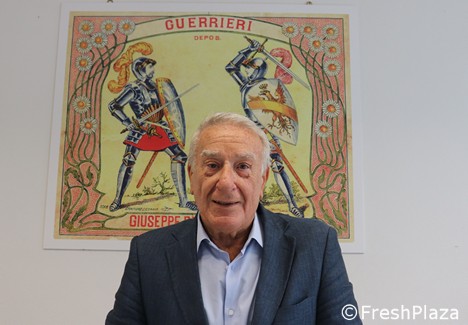 What the situation looks like
"The leaf symptoms - replied Catara- are characterized by distortions and a crimped leaf lamina, along with a smaller size and chlorine spots, very similar to those caused by the virus of the infectious variegation of citrus fruits. The disease, whose presence is currently reported only in Turkey, regards more than 60% of the plants, in some provinces."

"It is transmitted over long distances through infected propagating material, while locally it is transmitted by a whitefly (Parabemisia myricae), a vector also known for the transmission of other viruses, in a persistent or semi-persistent way, with an increased risk of transmission from one country to another." 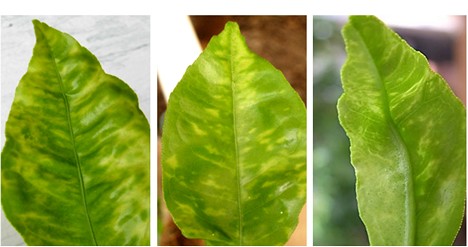 Picture above: CYVC symptoms on young lemon leaves. Discoloration of the veins and of the perinerval areas, border malformation and leaf lamina bollosity. In many aspects similar to infectious variegation.

"When ripe, the leaf blade presents bollosity, wavy borders and persistent malformations - continued the expert - on sweet oranges there is only a discoloration of the veins. Serious damage has also been reported on Satsuma mandarin fruit."

"Unlike chlorine dwarfism, the virus that is causing this disease is transmitted not only through its propagating material and winged vectors (Aphis craccivora, A. spiraecola and Dialeurodes citri), but also through work equipment. This explains how the virus, first reported in Pakistan (1988) by Italian researchers, has now spread to Turkey (2002), India (2003), China (2009) and Iran (2017)."

Keep your guard up and watch out
From what has emerged from Catara's statements, the fact that all citrus fruits, varieties and rootstocks may be carriers of the two viruses in latent form, and therefore act as sources of inoculation not easily monitored by the phytosanitary services, also contributes heavily to the diffusion of both causative agents.

"Non-systematic investigations carried out also with molecular methods by specialized laboratories - as the researcher pointed out - have not detected the presence in the Italian territory, but it is necessary to raise the guard by extending the investigations also to introductions made in unsuspicious times for sampling and/or research purposes. It is necessary to report any doubtful cases for the necessary controls."

"Since the two diseases are not currently included in the list of pathogens of European plant health significance," concluded Catara, while the vector insects of their causative agents are widely spread in almost all Mediterranean citrus fruit countries (and beyond), it is essential to take all precautionary measures, alerting the responsible plant protection bodies at both national and European levels to ensure that appropriate measures are being taken."

"The responsibility of operators, researchers and collectors is a prerequisite to avoid exposing the sector to further risks. The available diagnostic techniques are well suited to carry out all necessary tests of the propagation material. As required for all viruses and viroids, such measures are indispensable on mother plants."