After 280 years in the Ceres area, growing apples, pears and stonefruit, the Van der Merwe family of Boplaas1743 jumped at the chance to buy two fully planted fruit farms in the Simondium area, thereby bringing citrus into their portfolio. 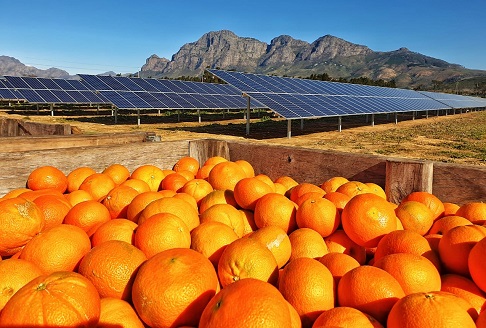 Eighty percent of the citrus orchards on Marlenique Farm are late mandarins, like Mor, Nadorcott, Valley Gold and African Sunset, with the balance consisting of early Satsumas, oranges and lemons. “We know a lot about apples and pears, but farming with citrus has brought a lot of lessons. The whole world is planting soft citrus and the time is up for some of our varieties that were planted on this farm by the previous owner,” Fanie van der Merwe says candidly. “Some cultivars have sorted themselves out but we’ve had a lot to learn on some of the new varieties.”

The Berg River runs through Marlenique and for the first time in four years they have a 100% allocation from the river; at the worst of the drought the allocation was cut to as little as 10% which was disastrous. Drip irrigation has been widely installed, through which they’re able to save up to 40% water, less during very hot periods.

In the Warm Bokkeveld they are currently harvesting early Bon Chretiens (Williams or Bartlett pears). “The pear season is looking good because Europe’s pear stocks are down by 20%, but for apples the year could be more challenging.” Forelle and Packhams Triumph are also big pear varieties for them.

In the Koue Bokkeveld they produce apples like the old backbone varieties of Golden Delicious, Panorama Golden (the latter primarily for the local market) and Grannies, as well as many club varieties.

“Thirty percent of our apples go into Africa which is a big developing market for us. We want to get into red cultivars, like some of the new varieties for instance Big Bucks (Flash Gala) and Early Red One. The local market is good for red apples and its storage is very good, up to nine months.”

Last year February an innovative floating solar project was unveiled at Marlenique to reduce their exposure to the national electricity provider’s unreliable supply. Installing the floating photovoltaic cells was 15% to 20% more expensive than on land, but it reduces water evaporation and the cooling effect of the water translates to a 6 to 8% increase in efficiency. The local Drakenstein municipality buys their excess power, which has helped to pay for the project. They would like to extend their reliance on solar energy to all of their farms. 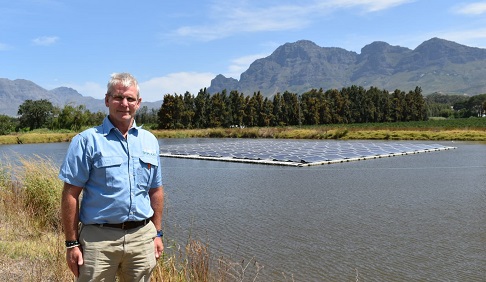 “Now our focus is little bit away from just production and turning to the value chain from farm gate to the market. We are building our own pack shed at Marlenique. At the moment we are using two to three export agencies but we are starting to build our own brand because the volumes are coming up,” Fanie says. “Over all of our farms the planted surface is 500 hectares.”

“There’s a lot of ecotourism potential in this part of the country and that’s something we’re looking at both here on Marlenique, with the Berg River running through the farm, and in the Koue Bokkeveld, especially with snow on the mountains during wintertime.

The political and economic situation in the country remains a concern, he notes.

“The main thing for us is to be the best in the world. You have to be hands-on with your clients and communication is of utmost importance. We think we’re the best on apples, pears and citrus.”