Israel is still supplying most of its own fresh produce, meat, chicken and milk, but the number of farms in the country plunged by 61% between 1981 and 2017, according to the first census of the industry taken by the Central Bureau of Statistics in four decades.

The drop in the number of farms, however, didn’t mean reduced acreage. Instead, the average farm size grew during the period.
The census was undertaken to get a comprehensive picture of the state of farming in Israel, where demand for housing has caused some to worry that agriculture is in danger.

About 100,000 dunams (25,000 acres) of farmland are no longer being used for agriculture since Moshe Kahlon became finance minister in 2015 and acted to increase Israel’s housing stock to stem soaring prices through an accelerated planning and building program.

The statistics bureau counted 17,388 farms across Israel, 62% of them located in moshavim, 26% in Arab communities (including Druze villages on the Golan Heights), 2% in kibbutzim and collective moshavim, and 10% privately owned by Jewish Israelis.
All, told they represented a drop from 44,400 farms counted in 1981 and 25,400 counted in a less comprehensive survey in 1995. 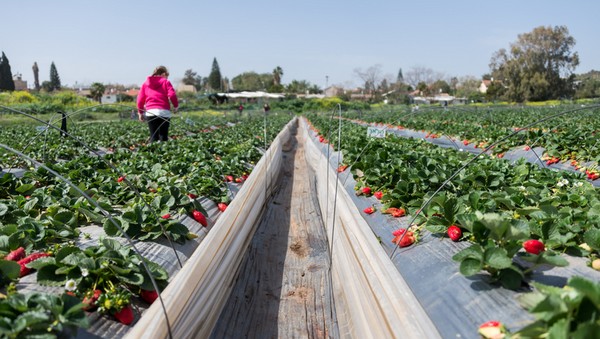 The Israel Farmers Association attributed the decline in the number of working farms to the lack of profitability. “The government needs to prepare a comprehensive national program to solve the problem of agriculture that includes options for preserving rural settlement by developing tourism by employing land and buildings in new ways,” the association said.

Shai Hagigi, chairman of the Center for Regional Councils, warned that the average age of farmers in Israel had risen to 60. “The government must recognize that agriculture is a strategic asset and undertake policies to encourage young people to enter the sector,” he said.

Total land used by farms, including areas that aren’t currently being worked and those used for farm operations, grew slightly from 1995 to 3.79 million dunams from 3.61 million.

Nearly two-thirds of all farmland are used for growing fruit and vegetables. Another 19% is used for livestock and 17% for mixed uses, the statistics bureau said.

Meanwhile, agricultural employment has declined. The bureau said total employment in farming, forestry and fishing was about 40,000 in the first three quarters of last year. That was just a little less than 1% of Israel’s 4 million strong labor force.

The State Comptroller’s Office had recently criticized the statistics bureau for failing to meet the UN Food and Agriculture Organization’s benchmark of one comprehensive survey per decade.

However, the bureau said that despite three years of appeals for an appropriation to cover the cost of the survey, half the needed amount was approved. The rest, it said, it was forced to take from other budget items.