After destroying horticultural lands in Ethiopia and Somalia, a destructive swarm of desert locusts have moved south to Kenya. Last week, they entered the country, and they're making their way south. Actions are being taken to control the situation, but the threat is not over, explains Martin Dyer, owner of Kisima Flowers in Timau, who is closely monitoring the situation. "They are only 60 km from Timau, where a lot of vegetable crops are cultivated as well as flowers." 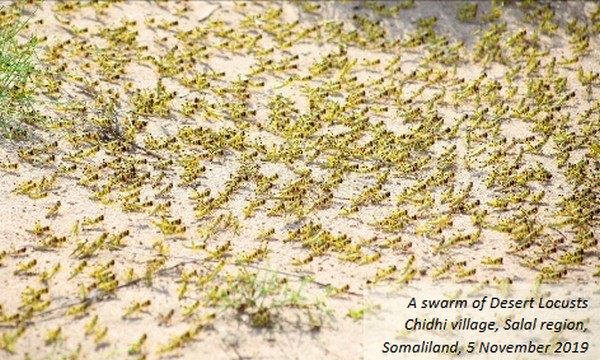 A threat to flowers?
A locust invasion is known to destroy everything in their path. "When a swarm passes, there is often no grass or leaves on the trees left." This ability to destroy a large area in a short period is particularly threatening to vegetable production - which is high in the Timau area. But what about the flowers, that are also widely grown in this area? "I expect it to be only a threat for the flowers grown in the open field. The swarm will probably just fly over the greenhouses. They will go for the easiest target."

Not there yet, but threat far from over
But the invasion is not there yet. In Kenya, the situation is handed over to the government, and together with the Food and Agriculture Organization (FAO) - that provides information on the general locust situation to all interested countries and to give timely warnings and forecasts to those countries in danger of invasion -  they monitor the invasion. When the swarm entered the country, they began aerial spraying in the north. As a result, the locusts moved back a bit, but they are expected to continue their southward trend. "The threat is far from over, they are very close."

For more information and updates on the locust invasion, see the website of Food and Agriculture Organization