Rosaria Arancia Bio is debuting with organic oranges and aims to produce 1.500 tons 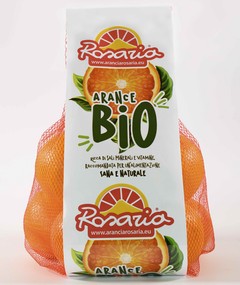 The Rosaria brand has announced its latest addition. The long-established Sicilian brand, renowned for its Rosaria Red Orange, which has just entered its fourteenth season (the Rosaria brand was launched in 2005) following the success of Baby Rosaria (small caliber, particularly juicy, excellent for pressed juices) of the 2017/18 campaign and the Rosaria Blonde Orange, presented last November, is now releasing on the market, Rosaria Arancia Bio, and will be on show at the next edition of Fruit Logistica (Berlin, 5-7 February), an event in which Rosaria P.O. continues to build on its strong presence.

"This is our very first time in the field of organic farming - underlined Aurelio Pannitteri, president of Rosaria P.O. - a project that we have been pursuing for some years now and that we are now implementing, as required by law. After all, we have always been mindful of the environment, by actively safeguarding the bees on our territory, as a result of our collaboration with a large number of local beekeepers, and by regularly using biological control of insect pests in our citrus groves. Therefore, the organic approach was a natural landing place for us".

The organic production in this first season, primarily intended for the Italian large-scale retail trade industry, consists of about 300 hectares, and our goal is to reach 1.500 tons. "It looks like a product with great potential - said Pannitteri - so we are very positive about this first commercial campaign already begun".

The P.O., based in Belpasso (province of Catania), operates through its affiliated members on a territory of about 1.500 hectares situated on the mountainside of Mount Etna, in the Catania valley, with a total production that exceeds 34 thousand tons over an eight-months long season, from November to June, with the new varieties added to the Tarocco. After debuting in the organic farming, a more important commitment of Rosaria in the production of organic oranges made in Sicily is not excluded.