Fewer Chilean apples and pears to the EU

But, the all-time pear export record dates back to 1997. Then, 175,000 tons of Chilean pears were exported. The Netherlands imported significantly fewer pears and apples last year than in 2018. In the wake of this, Dutch (re-)exports of pears, as well as apples, decreased.

Strong growth in apple exports to China
Most Chilean apples remain on their own (sub)continent. In the past year, 220,000 tons were sold in other South American countries. That was 10% less than in 2018. And in 2017, even more were sold there. Columbia is Chile's most important buyer, followed by Ecuador and Peru.

In the past year, the South East Asia region was the second-biggest buyer of Chilean apples. They bought almost 140,000 tons, an increase of  12%. This means, for the first time, more apples were exported to that region than to the EU. India, Taiwan, and China are the most important countries in South East Asia.

Exports to India en Taiwan were less in the last year than in 2018. However, Chilean apple exports to China grew dramatically. The export of Chilean apples to North America recovered a little from the dip it experienced in 2018. Sales of these apples in the Middle East is gradually declining. 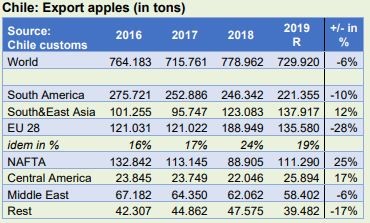 However, last year, exports to the Netherlands dropped to less than 40,000 tons. That is compared to almost 60,000 tons in 2018. Eurostat figures concerning Dutch imports show the same trend. The level is just higher. According to Eurostat, 50,000 tons were imported from Chile last year. In 2018, this was 80,000 tons. This includes both re-exports and so-called throughput. 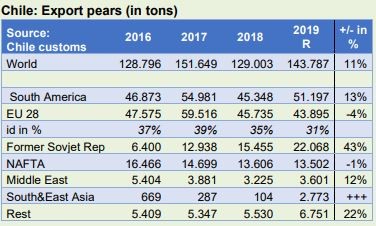 The EU did not only import fewer apples from Chile last year. EU apple imports from other Southern Hemisphere countries were also considerably lower than in 2018. In 2019, the EU imported a total of more than 360,000 tons of apples from Southern Hemisphere countries. In 2018, this amount was almost 500,000 tons. With 11,500 tons, New Zealand sent almost 20% less. South Africa's volume of 115,000 tons, also dropped by close on 20%.

Lots of Chilean pears to Russia
Chilean pear exports are a little volatile. The export of these products did climb by 11% in the last year. It was, however, less than in 2017. Just as with apples, Chile's neighboring countries are its most important buyers of their pears. But, these countries' shares are smaller. What is striking is the substantial increase in Chilean pear exports to Russia. In the past year, 22,000 tons were sold in that country. In 2018, this was 15,000 tons.

EU got fewer Chilean pears too
Relatively many pears make their way from Chile to the EU. In the past, this concerned 44,000 tons, or nearly a third of that country's total export. To compare - of all Chilean apples, not even 20% goes to the EU. 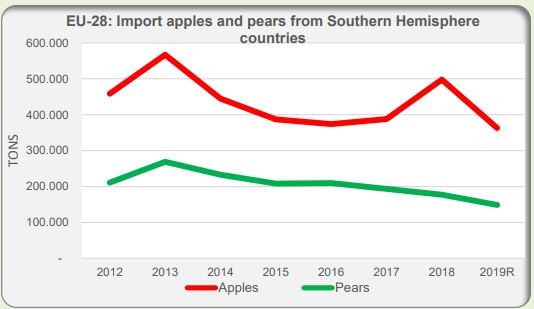 When it comes to global totals, the Netherland is the third-largest buyer. However, within the EU, it is the top buyer of Chilean pears. Exports to the Netherlands fell significantly in the past year - with 17%, to less than 15,000 tons. In 2017, this was still 27,000 tons. Italy is Chile's second-biggest client in the EU. However, more Chilean pears went to Italy last year.

In total, Chile sent four percent fewer pears to the EU. Chile is the third-largest supplier of pears to the EU market after South Africa and Argentina. South Africa is the largest. In the past year, the EU imported 12% fewer pears from that country. This amounted to 67,000 tons compared to 76,000 tons in 2018. Pear imports from Argentina dropped by a quarter to 41,000 tons. That is versus 54,000 tons in 2018. 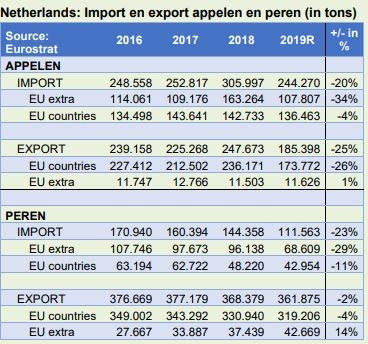 Low Dutch import and export of apples and pears in 2019
In the Netherlands, far fewer apples and pears were imported from, especially countries outside of the EU. This shrinkage amounts to about 30%. Imports from EU countries also decreased - apples with 45% and pears with 11%. This, after a record amount was imported in 2018.

The 2019 import level reverted to those of 2016 and 2017. Chile is the Netherlands' top apple supplier. It is followed by Belgium, New Zealand, Poland, France, Italy, and Germany. South Africa and Argentina lag far behind. Last year, compared to 2018, more apples were imported from only Belgium and Germany. The Belgian imports were re-exports of apples from New Zealand.

Following this sharp drop in imports, Dutch (re-)exports of both apples and pears were also lower last year than in 2018. The decline was limited for pears (-2%). But last year 25% fewer apples were (re-)exported from the Netherlands than in 2018.