The adaptation of fruit growing to the conditions of climate change, future strategies in plant protection and the promotion of biodiversity as well as challenges in water management for fruit growing farms were among the key topics during the visit of Miriam Staudte, spokesperson for agriculture and nutrition in the Green Party in the Lower Saxony state parliament, to the fruit growing experimental station of the Lower Saxony Chamber of Agriculture (LWK) in Jork (Stade district).

"We need the independent, scientifically working experimental entity, as there is with regard to fruit cultivation, in order to support the producing companies as concretely as possible in mastering challenges such as climate change and to continue to operate successfully," explained Chamber Director Hans-Joachim Harms, who had invited the Green politician. 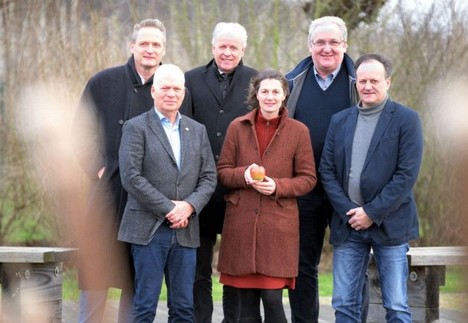 Variety trials
The LWK Fruit Growing Experimental Station is part of the Esteburg Fruit Growing Centre in Jork. On 25 hectares of experimental land, the cultivation of new apple, pear and cherry varieties is tested, among other things. In laboratories and experimental storage facilities, experts analyse the quality characteristics of numerous existing and new pome, stone and soft fruit varieties. The aim: tailor-made recommendations for fruit growers.

"We are working on optimising variety-specific storage, because during months of storage each apple variety requires a special composition of the air consisting of oxygen, nitrogen and carbon dioxide, the main natural constituents, to ensure that it can be kept for as long as possible and remains tasty," said Dr. Karsten Klopp, head of the fruit growing experimental station, naming an area of current research. As a centre of excellence for fruit growing in northern Germany, Esteburg is responsible for 1,000 fruit growing operations in Lower Saxony, Schleswig-Holstein, Mecklenburg-Western Pomerania, North Rhine-Westphalia and Saxony-Anhalt.

Temperature increase and the extended vegetation period
The climate change is already leaving clear traces in the Alte Land, Klopp told the green agricultural expert: "Due to the rise in temperature and the extended vegetation period, new apple varieties and pears are flourishing better on the Lower Elbe - but at the same time the risk of blossom frost, heavy rain, drought and insect pests is increasing.

As part of the land readjustments in the special area and in order to always have sufficient water available for the frost protection irrigation, many of the fruit-growing farms on the Lower Elbe have now created ponds. "This has created a new biotope structure in the Altes Land, which has resulted in a considerable enhancement of biodiversity," emphasised the fruit-growing expert of the Chamber of Agriculture.

Due to the decreasing number of approved active substances and increasingly strict regulations, the further development of plant protection strategies is one of the main areas of activity of the fruit growing experimental station. "It is very important that we develop independent research results in order to be able to offer practical farms rapid solutions," said Klopp. In Jork, for example, tests are being carried out to find out how tunnel sprayers can be used to prevent spray drift and reduce the amount of pesticide used.

Lower Saxony number one agricultural state
Other topics such as the very limited market environment for traditional apple varieties, the influence of fruit imports and the current discussions on nature conservation, fertiliser law and the future direction of agricultural policy were also discussed during Miriam Staudte's visit. "As a specialist organisation, we are of course happy to contribute our knowledge on request, so that Lower Saxony remains the number one agricultural state in Germany," emphasised Chamber Director Harms. "Many decisions have to be viewed holistically, for example with a view to the regional market and global climate change, in order to avoid conflicts of objectives.

In addition to Klopp and Harms, the discussion with Miriam Staudte was also attended by Johann Knabbe, district farmer of the Stade District Farmers' Association and chairman of the LWK committee for finance and organisation, Jens Stechmann, chairman of the fruit growing trial ring of the Alte Land, and Ralf Poppe, spokesman for the Greens in the Stade District Association.

The Altes Land, which is home to the LWK's Jork Fruit Growing Experimental Station, is the largest contiguous fruit growing area in Germany. On the Lower Elbe, about 750 farms produce about 300,000 tons of apples and pears per year on 10,000 hectares, as well as the well-known Knubber cherries and other stone fruit. Every third apple produced in Germany comes from the Lower Elbe. The most frequently cultivated apple varieties currently include Elstar, Red Prince and Braeburn. Newer varieties such as Wellant and Kanzi are now well known to consumers and are in increasing demand.