Compañía Aguacatera del Sur: “Our main strategy is still working with the best”

Compañía Aguacatera del Sur has taken stock of the 2019 avocado campaign in Europe and analyzed the forecasts of what is coming in the 2020 campaign.

"It has been a season packed with great challenges, but we have faced the year's various campaigns setting objectives for each of them, and the results couldn't be more positive," says Patricia Cid, one of the directors and partner of the company.

Compañía Aguacatera del Sur has stuck to a clear strategy from day one: "working with the best producers and exporters from each origin. By doing this, we guarantee a stable supply of avocados of the highest quality during the 365 days of the year, regardless of the origin," says Josué P. Navarro, another of the directors and also a partner of the company. 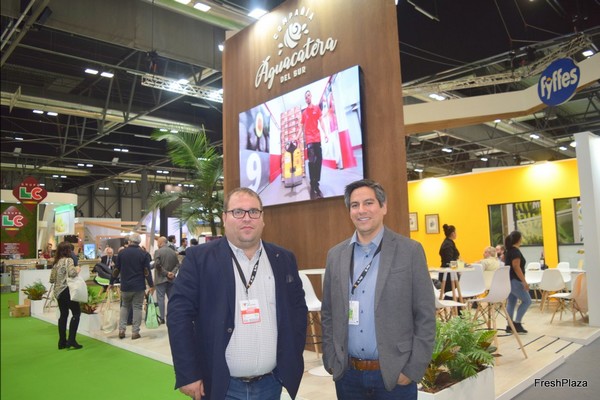 Oscar Martínez and Miguel Loayza, directors of Compañía Aguacatera del Sur, at the latest edition of Fruit Attraction, in Madrid.

The year 2019 was an atypical one within the new context of the avocado business worldwide. "The capacity of the origins that supply the European market during the summer is very significant; however, during the latest campaign, Peru (particularly the northern area, which accounts for most of the country's export supply) had a very small production. As a result of this, very high prices were recorded. It also made something unprecedented possible: the entry of very considerable volumes of Mexican fruit from July onwards," says Miguel Angel Loayza.

This year is looking different. "Peru predicts record export volumes and South Africa also expects a big recovery from the low production of 2019. The key will be to find a balance between the real capacity of European operators and the prospects of the exporters at origin, not only in terms of volume, but also of sizes," said Oscar Martínez.

"The company's main strategy remains the same: working with the best producers of each origin," said the executives. "On this basis, new projects are underway that will allow us to achieve a greater commercial development," said Cid.

Compañía Aguacatera del Sur is a company formed by NGF and Grupo Plátanos López, of Mercamadrid. Founded at the end of 2018, it has already managed to become one of the main importers and marketers of avocados from Spain and Europe. The fruit sold by the company comes mostly from Peru, South Africa, Mexico, Colombia, Israel, Brazil and Chile.

A company delegation will attend the next edition of Berlin's Fruit Logistica in February.