As of yesterday, Delhaize has Be-climate bananas on offer. These are 100% CO² neutral. This forms part of the company's mission to become carbon-neutral. Delhaize wants to achieve this by the end of 2021. Their bananas' CO² impact is entirely compensated for. That is thanks to measures that reduce and compensate for these emissions.

These measures are implemented from when the banana trees are planted. They are included in transportation, and right through to when the fruit arrives in the store. Based on this example, Delhaize wants to make other fruits and vegetables CO² neutral too. That is going to be done through climate protection projects. All these CO² initiatives are part of the Lion’s Footprint program. With this, Delhaize wants to combat the use of excessive plastic, CO² emissions, and food wastage. 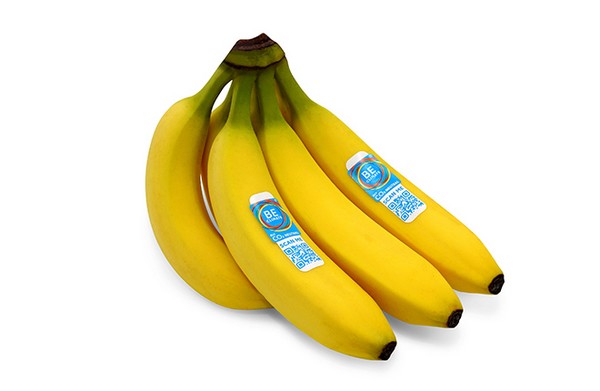 How does a banana become CO² neutral? Firstly, Delhaize calculated how much CO² a banana emits. This work was done in partnership with Port International. These calculations showed that an average of 0.9kg of CO² is emitted per kg of bananas. For the total annual sales volume, this amounts to 7,110,000 kgs of CO².

Based on this, Delhaize first looked at how CO² emissions can be reduced throughout the chain. As part of this process, the company distinguished between banana cultivation, its transportation, ripening, and the product's delivery. In this way, the integral process from its cultivation to when the product arrives in the store is included.

"The process' main focus is on reducing CO² emissions. This ensures that transport is organized in a greener, more sustainable way. Packaging is more sustainable, and green energy is used. We still want to make up for the emissions we cannot reduce. In this way, we want to become carbon-neutral," says a Delhaize spokesperson.

"We do this by supporting climate protection projects. For example, we support a drinking water project in Cambodia and a reforestation project in Peru. We do this to compensate for the remaining volume of CO². Based on this pilot project, Delhaize is now looking to add other fruit varieties to this CO² neutral program.  One of the first products that are being considered is strawberries."

Lion’s Footprint is a program of action Delhaize wants to pursue. It intends to do so to reduce the company's environmental footprint. This reduction is to take place on all fronts. The plan consists of three main parts. Delhaize has an ambitious goal to reach plastic-neutrality. The company also wants to achieve a neutral balance in the area of food wastage. Then, they want to become carbon-neutral too. Delhaize will tackle these goals with the help of its employees and affiliated stores. They want to become the first Belgian retailer to have a neutral environmental footprint.