The irrigation systems and oases in the arid south of Tunisia are failing to keep up with the demands of thirsty palm plantations. Mansour Rajeb is wrapping a plastic protective sheet around the branch of a date palm in his oasis near the village of Bchelli, in southern Tunisia. Tying it up, he lingers. “I’m worried,” he says. “The quality is getting worse. The dates are getting drier.”

Like thousands of farmers across the region, the effects of the climate crisis and water scarcity are threatening his livelihood. “When the quality is poor, we receive lower prices. I’m earning less. This year, I’ll earn a third of last year, which was an average year.”

On the road out of Bchelli, a gust of wind makes the sand rise like steam. Beyond the palm trees lies desert, a flat, barren terrain of scrub, rock and sand. Communities have survived here for thousands of years, but the changing environment may soon make it uninhabitable. 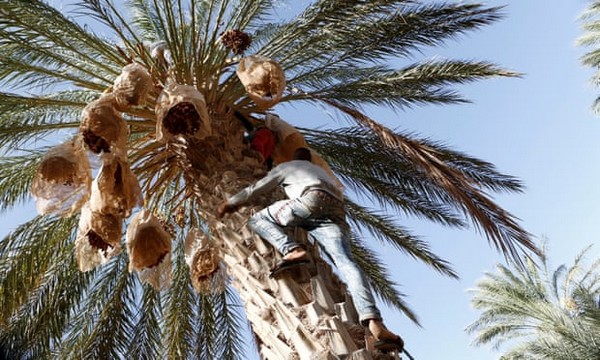 Overall, temperatures here have risen by about 1oC (1.8oF) since 1988, according to data collected by the meteorological office in Tozeur, the capital of the region’s western district.

“Temperatures used to peak in August and then fall, but now the heat persists until October,” says Taieb Foudhaili of South Organic, a date exporting company based in Kebili. Given this pattern of warming, humidity levels are falling and the plants adapt by releasing water. The result, says Foudhaili, is a drier, poorer product. His company must now do more sorting to maintain quality standards.

Global heating has also created shorter periods during which date palms can flower and pollinate, according to Nabila el-Kadri, an agronomist based in Kebili. As a consequence, Kadri has observed a decline in the productivity of dates per hectare.

But it is not just rising temperatures causing anxiety. Over recent decades, and particularly after Tunisia’s 2011 revolution, unlawful plantations have spread like blots across the white landscape. The state has failed to exert proper controls. There are now 38,000 declared hectares of palm tree across the Kebili region, though Kadri believes the real figure could be as high as 50,000 hectares. More than half of the country’s dates are produced here.