With the season progress reaching 50% and near 56,200 tons exported until week 1, the shipments from Chile remain fairly in line with the previous campaign. The north zone is already finished, with exports 16% higher than last season, this growth was led by new varieties. The central zone is in the final stage of harvest and so far, the shipments shows a 20% drop with respect to the figure reached in the previous season.

In contrast to this, cbbc.iqonsulting.com reports that, from the central south to the south zone, which are contributing with the main export volumes, shipments are 3% higher compared to the previous campaign, led by varieties such as Duke, Legacy and others that are being recommended by the Committee for being exported. The quality of the fruit from the southern regions has been very good this season due to favorable weather conditions. 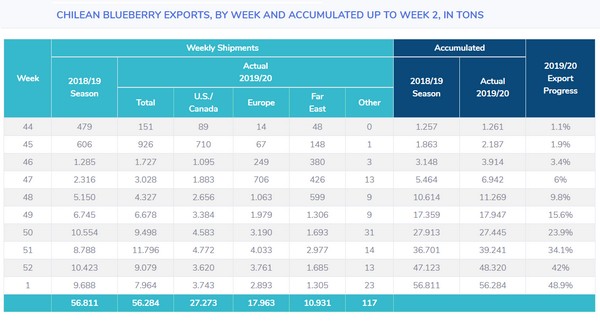 Notwithstanding the foregoing, although the total accumulated volumes are greater than the previous campaign, the end of the season has been observed more abruptly in the early and mid-season varieties, as a result of high temperatures and crop concentration.

In relation to organic blueberries, exports to date total 6,131 tons, 40% more than the previous season.