Cucumbers, zucchinis and pumpkins in danger

Cucurbit aphid-borne yellows virus
The Cucurbit aphid-borne yellows virus was discovered in France in 1988 and infects cucurbits such as cucumbers, zucchini and squash. An infection leads to chlorophyll deficiency and leaf thickening, among other things, and is accompanied by sometimes massive harvest losses. The virus is transmitted by aphids and is common in the Mediterranean region. 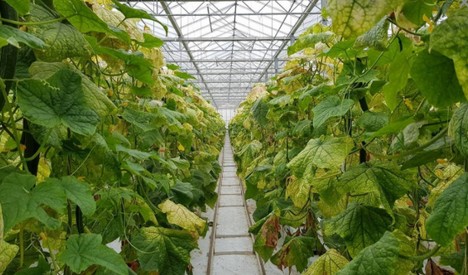 A look into an infested Bavarian greenhouse / Image: Leibniz Institute

Establishment of the virus also expected in Central Europe
The scientists assume that CABYV will also establish itself in Central European countries. "In the meantime, the virus has also been discovered in Slovakia and Poland, for example," says Dr. Wulf Menzel of the DSMZ. "Since both the aphids that transmit the virus and natural virus hibernation hosts (various weeds) are native to our country, it can be assumed that the virus will continue to threaten the populations of the cucurbits in Germany and other countries in northern Europe next year." The plant virologist therefore recommends effective preventive measures when growing cucumbers and the like in a greenhouse, such as preventing aphid infestation.