“What’s exciting about the fruit industry is that there’s a lot of expansion taking place in the deciduous and subtropical industries and we believe we’re offering a great solution at the right time,” says Shaun Biggs, experienced nurseryman and Ellepot representative in South Africa.

“Many fruit nurseries in the Western Cape are looking to move away from bare-root production for a number of reasons, for example a shortage of pathogen-free land with sufficient water availability.” 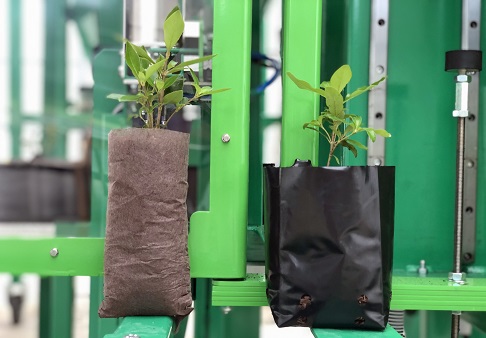 An Ellepot bag left, compared to a conventional nursery bag (all photos supplied by Ellepot)

“One thing I’ve learned is that you set the plant’s trajectory of growth in the nursery,” he notes. “This places a great responsibility on nurseries to provide quality trees that transplant well and quickly establish themselves in the orchard.”

Worldwide there is a move towards containers, he says, and Ellepot offers key advantages. 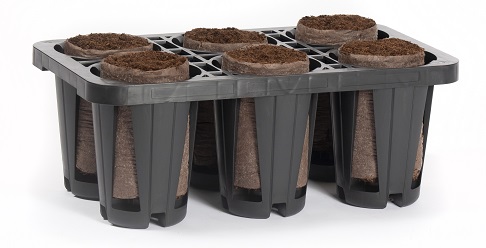 An Ellepot tray with filled Ellepots

The first is nursery efficiency. “When you scale up your numbers, the Ellepot System has significant benefits. Pots are filled by machines, instead of by hand, which is particularly important in subtropical nurseries where better hygiene is important. The nursery process can be automated, with a better work flow, minimal handling and reduced labour costs.” 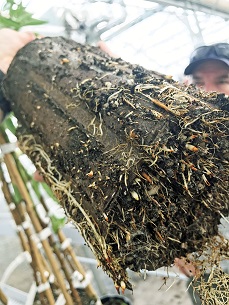 Air pruning is at the core of the Ellepot system. The root system displays the same tendency towards apical dominance as is seen above-ground. “It’s exactly the same principle that applies to basal root pruning to stimulate root laterals,” Shaun explains.

In an Ellepot container the plant’s root tips are air-pruned because the roots grow through the paper, are dried off and this stimulates the development of secondary roots (see photo right of air-pruned root tips).

The result is a more fibrous root system with a higher root density in the container. Air-pruned root tips are ‘paused’ and continue growing in the same direction when transplanted into the soil. The root system therefore has a more natural root architecture, without the deformations that have been observed in plastic containers in the past.

Another benefit to the nursery is in a conventional plastic container, air exchange is only possible through the exposed surface at the top of the container. In a paper-based Ellepot, the full circumference of the container allows air exchange, supplying more oxygen to the roots, leading to faster root development and up to 15% quicker growth in the nursery. 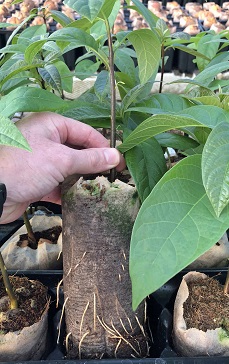 The degradeable paper-based Ellepots don’t need to be removed at planting, thereby speeding up transplanting and reducing root damage.

“The combination of a higher root density and reduced transplant shock mean we can get the same or better performance in the field with a smaller container than with plastic containers,” Shaun says.

This means less medium is used in the nursery (allowing for better quality medium to be used) and moreover more plants fit on a truck, reducing the transport cost of getting trees to the field.

For example, Shaun points out that a conventional 6 litre plastic bag for an avocado sapling can be replaced by a 3 litre Ellepot with the same or better field performance.

Environmental benefits
Paper-based Ellepots have a 20% lower carbon footprint than plastic pots and there is no waste after planting since the pots are planted directly into the soil.

“There is a worldwide move away from single use plastics and we’re proud to be playing a small part in finding solutions.” says Shaun.

Three Ellepot production centres in South Africa
The Ellepot Propagation System consists of a range of machines that manufacture the Ellepots, a selection of papers specific to the crop being grown and specially designed trays that promote air pruning of the root tips. 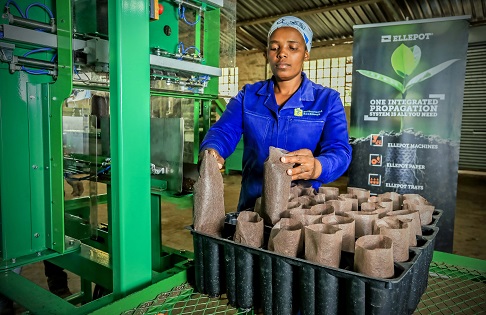 An Ellepot Growbag machine, capable of filling 900 Ellepots per hour

“Any nursery can adapt to the Ellepot system,” says Shaun, noting that there are currently three Ellepot production centres in South Africa, in KwaZulu-Natal, Mpumalanga and the Western Cape. Nurseries can purchase the Ellepot machines and manufacture their own Ellepots on site.

“Where capex isn’t available or warranted, our production centres can manufacture ready to use Ellepots, making the conversion to Ellepots an easy process for the nursery.”

The KZN Ellepot production centre serves the forestry sector as well as high-value vegetables and increasingly macadamias as many sugarcane farmers are establishing orchards. Mpumalanga has a very high density of macadamia and citrus production; with trials underway in avocados. In the Western Cape, Ellepots are primarily being manufactured for citrus, apple, peach, almond and vine nurseries. 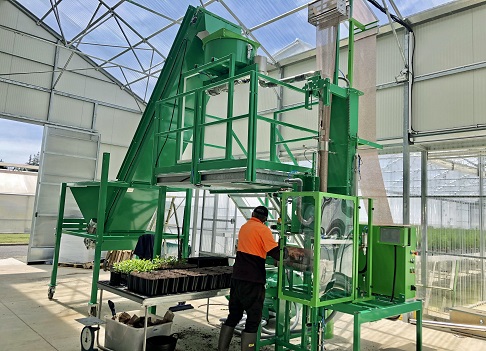 Various volumes of Ellepots can be manufactured with the machines

There are a number of trials underway in the South African fruit industry, as well as several turnkey nursery projects being built that will be producing citrus, macadamia, avocado and apples. Ellepots, made in South Africa, are also being used in Mozambique, Zambia and Zimbabwe.