Japanese Fuji apples are now on the market. This is a very good season for Japanese apples with regards to quality and production volume. According to one exporter, although the size of the apples is smaller than in the previous year, the sweetness increased by 2 degrees. 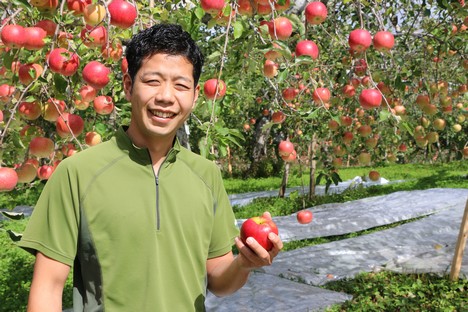 Yasuko is the PR manager of the Japanese fruit export company Nihon Agri Inc. “The harvest season for Fuji apples lasts from September until mid-late November. In a controlled atmosphere the apples can be kept until May. This year the weather conditions have been perfect for Fuji apples. The sunlight hours were quite long due to historically less rain fall this season, which led to the sweetness of the apples to increase on average 2 degrees compared with the previous season, which resulted in better taste and higher quality. However this has also led to the size of the apples being smaller than in the previous season,” Yasuko said. 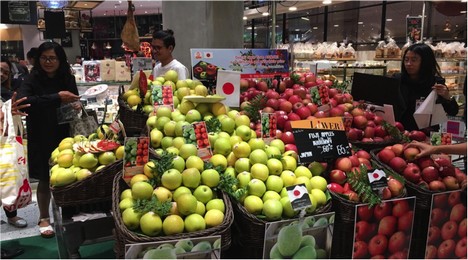 “Apple exports from Japan have increased this season, a total of 12,225 ton shipped between September and November, up 8% from last season. Despite the decrease in demand from Hong Kong due to political unrest, strong demand from Taiwan, a regular strong buyer of Japanese apples, and new demand from countries newer to our products such as Indonesia and Philippines, has kept demand alive. Notably, we have recently started exporting Fuji apples to the Philippines, as this type of apple is very popular among Philippine consumers with its sweetness and crispness. Other than Philippines, Vietnam and India have also recently eased import restrictions of Japanese apples, where we expect further opportunities. We have particularly high hopes for India, already a major apple producer and also a consumer of 2.2m ton of apples annually – the high quality of Japanese Fuji apples should catch Indian consumer attention. For this season, we expect to ship a total of around 3,000 tons to multiple countries, cultivating such new consumers.” 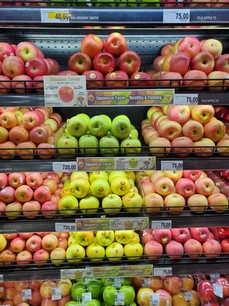 When talking about how the apple sales channel has developed in the past few years, Yasuko said, “Japanese overseas apple sales have mainly been through trading companies and Japan’s agricultural co-op. There were not many companies selling apples directly in the supermarkets yet, but we hope to be a leader in providing apples to supermarkets instead of just leaving it up to local exporters. Instead of using our company name, we use ‘ESSENCE’ as the brand name for selling apples to supermarket chains, since we intend to deliver the natural characteristic – high quality taste, which we think is the ‘essence’ of any kind of agricultural food product – of Japanese apples to consumers.” Yasuko added, “What we saw in recent years is that South-East Asian consumers pay increasing attention to fruit package design. We try to communicate the stories related to the fruits on the package, such as how it was produced, who produced it, or how it was shipped to the retailers.” 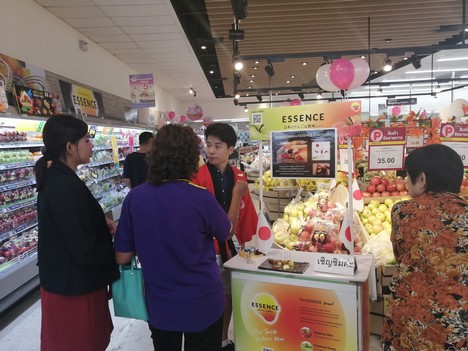 When talking about the specialty of Japanese Fuji apples, Yasuko said, “Besides special taste and healthier growing conditions, out of various Fuji apples produced in different locations globally, Japanese Fuji apples contain the highest level of Procyanidin, linked to lowering visceral fat. This has made our apple very popular among overseas customers.”