While the full extent of last weekend's bushfire is still yet to be assessed, it appears apple growers in the New South Wales town of Batlow may have escaped major damage.

The blaze destroyed at least 20 residential homes, businesses and town infrastructure, and claimed the life of a man who was helping to save properties in the South West Slopes town.

The Snowy Valley Council confirmed, as of Monday afternoon, that Batlow Road remained closed for all traffic therefore residents and land/orchard owners who evacuated the town, have not been given access to assess the damage.

However, a photo of the "Welcome to Batlow" sign, taken by a news cameraman inside the fire zone, shows just how close the flames came; scorched earth just metres from apple trees. 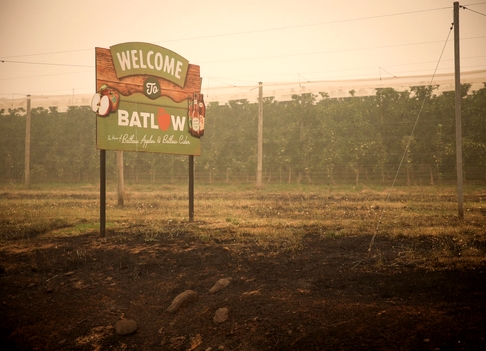 Photo on Twitter captioned: "How about some positivity. It looks like some Batlow apples have been saved!" (source: @ABCcameramatt)

"The orchard has over 200,000 apple trees but sustained damage to less than 5000 trees on the boundary of the property because fires were largely contained to areas outside of orchard blocks," Managing Director Scott Montague said.

More importantly, all Montague staff were evacuated prior to the arrival of the fire and no injuries have been reported. Mr Montague says while these losses will have an impact of apple supply, there will be a significant crop of high-quality apples from the Batlow region available for sale across Australia in the coming season. 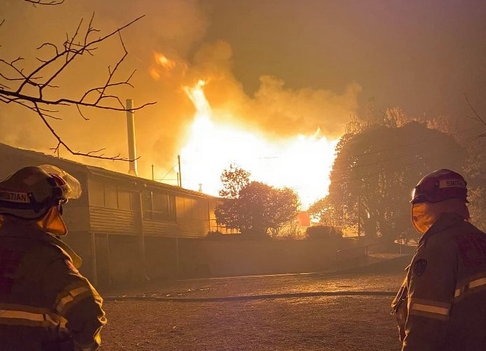 Photo on Twitter: The old hospital at Batlow, which has been lost to the fire. (Source: James Zimmerman/@AndrewRLP)

He added sincere thanks and gratitude to staff, the local community, the NSW Rural Fire Service (RFS) and Emergency Service workers for their efforts in protecting local assets and houses in the area.

"While there is severe damage to some orchards and buildings in the greater Batlow area, we are grateful that many of the buildings and houses in Batlow town and district have largely been saved," Mr Montague said. "Our thoughts turn to the local people in Batlow who have lost property and tragically one reported lost life. We are committed to supporting recovery of the region."

Elsewhere, Batlow resident Brad Harvey told The Weekly Times that about 12ha of his father’s apple orchard was lost in the fire - but it was difficult to get a true indication of the extent of the damage to the region, until the smoke lifts.

It was a similar story for fellow grower Greg Mouat, who evacuated to a nearby town last week. He has not been able to return to the orchard, but he told ABC's Radio National Breakfast with Tom Tilley that he knows of damage to his sheds and protective nets - but luckily his home is fine.

"The house and shed aren't very far apart, so we think that there must have been some Rural Fire Service (RFS) intervention there to stop the house going up. So, that's saved and we are thankful for that," he said. "The orchards are another thing, and we just don't know what the extent of damage will be, and what sort of clean-up is needed. That won't happen overnight. That will be a long process. The biggest issue will be the clean-up, and then making sure that we have got sufficient cash flow to get through until harvest in mid-February. It will begin with Gala apples, then go through until early May with Pink Lady." 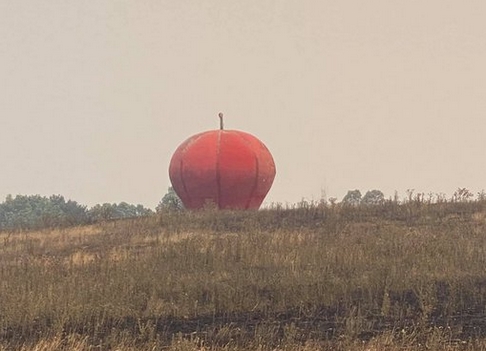 Batlow is home of "The Big Apple" landmark, which barely suffered a scratch, as the town lost other vital infrastructure. Mr Mouat told the ABC he has mixed feelings about returning.

"This is really unprecedented territory, it is just really difficult to comprehend really," he said. "As much as I am looking forward to getting back up there, there is a certain amount of dread to what we might see."

CEO of Peak industry body Apple & Pear Australia Limited (APAL), Phil Turnbull extended his thoughts to those who have been impacted, not only in Batlow but two other growing regions affected by the fires, the Adelaide Hills (SA), which were hit just prior to Christmas, and Bilpin (NSW) which was also impacted last weekend.

"The apple and pear industry has faced an inordinate amount of challenges over the last 12 months, in addition to fires, there is the on-going drought, hail storms, bird and flying fox damage, as well as excessive heat," Mr Turnbull said. "One thing that has come through this period is both the resilience and goodwill of everybody in the industry. A lot of work needs to be done over of the coming weeks to get the industry the support it needs and back on its feet. In particular, APAL will be working closely with our state counterparts, to both support and represent the needs of the growers, regions and industry."

South Australia has reported that approximately 25 hectares were damaged, with some growers more heavily impacted than others. Bilpin in the Blue Mountains in NSW has reported extensive fires but in several cases the fires were kept out of the main orchards with damage occurring on the perimeters of the orchards.

APAL is asking growers and industry stakeholders who require any support during this period, to call on (03) 9329 3511.