According to a four-year government survey, the vast majority (92%) of fruit and vegetables sold in Brazil are within national safe levels for pesticide contamination.

The survey, conducted by the National Plan for Control of Waste and Contaminants in Vegetable Products (PNCRC) between 2015 and 2018 on behalf of the Ministry of Agriculture, Livestock and Supply, showed that 92% of the samples were within the level of compliance, meaning the vegetables are safe for consumption.

The PNCRC survey looked at pesticide residues, biological contaminants such as mycotoxins and Salmonella, and chemicals such as arsenic and cadmium on both domestically produced and imported products.

It found that 53% did not have any residues or contaminants while a further 39% of the samples had traces that fell below the Maximum Residue Limit (MRL) established by food safety regulatory authority ANVISA.

Of the remaining 8% of “non-conforming samples”, 7% were in breach of safe levels for pesticide residues.

The Federal Agricultural Defense Laboratories analyzed the samples using a multi-residue pesticide method that analyzes over 200 active ingredients and can be expanded to over 300. 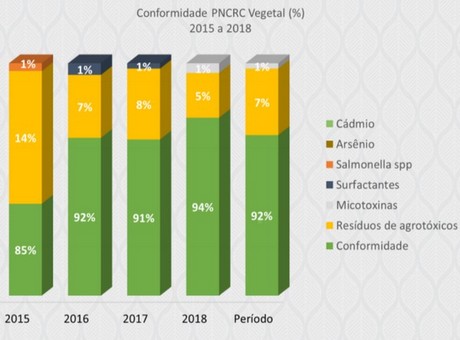 Samples of peppers and strawberries were found to have unregistered crop protection chemicals, according to a statement published by the Ministry of Agriculture, the results of the PNCRC resemble those released by the European Food Safety Authority (EFSA) and the United States Food and Drug Administration (FDA).

“The numbers show that the results found in Brazil are fully in line with international parameters. So, Brazilian products are safe, even internationally,” said Glauco Bertoldo, director of the Plant Products Inspection Department.

The assertions are at odds with a list published by non-profit Pesticide Action Network’s (PAN), according to which almost half of the phytochemical products approved since far-right Jair Bolsonaro took office contain active ingredients that appear on a list of highly hazardous pesticides that pose a risk to human health or the environment.

According to a Greenpeace Unearthed investigation, more than 1,200 pesticides and weedkillers have been registered in Brazil in just three years, including 193 containing chemicals banned in the EU.