How tight does the Great Britain potato market look?

The second 2019 provisional production estimate from AHDB places the crop at 5.19Mt, with a range of +/- 159Kt. This estimate is based off an unharvested area of 5.5% and a sample of 292 grower panel forms.

The estimated yield has risen to just over c.46t/ha, resulting in the increased production prediction. A final production figure will be released in the New Year, when more data has been received, as will the November stocks estimate. As further forms are submitted, we may well see the production and unharvested area figures change.

How tight does it look?
This article uses sector yields from the ADAS lifting report which have been weighted against the AHDB provisional yield to calculate regional yields. The official sector and regional yields will be released with the updated production estimate, as soon as enough forms are returned. The figures quoted do not cover Wales or the South of England.

This autumn has been the wettest across England since 2000 and the fifth wettest on record. These conditions have hampered lifting across GB, with progress particularly slow in Yorkshire and the North of England. What impact might this have on supply levels for the coming season? Much depends on the sector, as this article will explain.

Firstly, how might supply be affected?
By the start of November, an estimated 482Kt was still in the ground. However, despite challenging lifting conditions, crops that have gone into store seem to be faring okay at this stage. Wetter material was moved as quickly as possible to minimise any negative impact in stores. However, at this stage in the season there is no overall view on the volume of this. The key watch point will be the end-November stocks survey, which will give the first estimates on volumes shifted early to avoid storage problems later in the season. 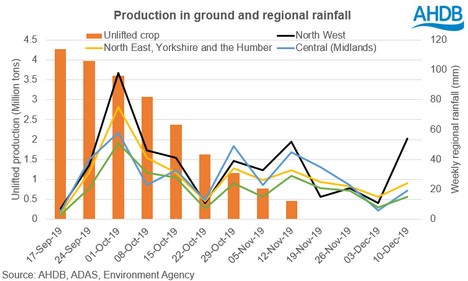 So will this give the market support?
Much of this will be sector dependant, with different GB regions growing for different sectors.

Packing prices have been creeping upwards due to the weather pressure on the market, but have not reached the highs of last season. Part of this is due to an expansion in contracted area this season to 70%, which has reduced free-buy requirements for packhouses. Equally while parts of Lincolnshire and the Fens were hard hit by the weather, Scottish crops came out of the ground in good order and are storing well. With a large proportion of the Scottish packing area (77%) grown to contract this year, a significant volume of Scottish free-buy supplies could head into England and weigh on packing prices. 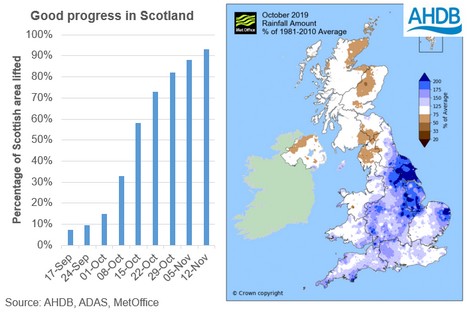 The Northern worries for processors
Yorkshire and areas of the North West and North East were the worst hit by the weather throughout the entire lifting period. These areas received increased rainfall earlier than the other counties and, in terms of percentage, had the largest proportion of area still to harvest at 12 November, ranging from 20-30% unharvested.

Combined, these regions account for c.30% of the UK processing area. Anecdotally, reports have stated that a reasonable proportion of the crop left in the ground is of late processing varieties. As at 8 October, an estimated 774Kt was still to be lifted. In addition, the heavy rainfall since the start of September has degraded fry colours. For crisping crops this caused issues with rejections, despite tight supplies. Fry colours for crops lifted during October have been particularly affected. Anecdotal reports have stated that attempts to recondition these crops have not been particularly successful, with only a minority meeting specification. 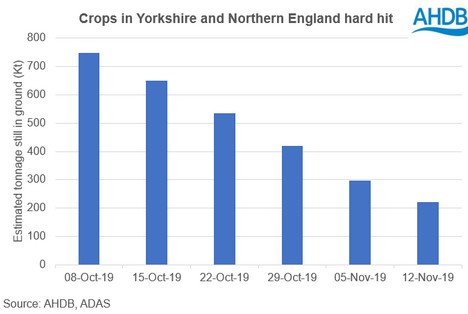 Is there still opportunity to lift this year’s crop?
During November, growers have been trying their best to lift whenever weather permits. However, soils have not had a chance to dry out and above average rainfall across Yorkshire and much of the North means that progress has been slow at best. This is the same for parts of the Fens and Lincolnshire, with many growers still having crop left in the ground. Most of what has been lifted is being moved as quickly as possible as it isn’t suitable for storage.

Growers could well try and lift crops in the spring, but the quality is likely to be variable and how much will be usable is unknown. For packing crops, we may see a decent proportion that can be sold into its original intended market. However, processing potatoes could end up in other markets, with fry colours deteriorated due to prolonged periods in wet and cold soils. While some French Fry crops may pass muster, tighter specs for crisping supplies will cause more of an issue.

Looking forward
With European yields below average and the area steady for table varieties, there is a reduced opportunity to import significant volumes for the packing market. There is also a strong demand for table potatoes from Eastern Europe with shortfalls in Poland, Czech Republic and Romania.

Post-Christmas, the volume of potatoes leaving Scottish stores will likely set the price ceiling of the domestic market. Scottish supplies may head south of the border, pressurising English prices.

For French Fry processors, we could see increasing volumes of imports arriving from France, Belgium and the Netherlands. Currently the ex-farm price of Belgian frying potatoes is sitting under €110/t (as at 13/12/2019), making it a cheaper alternative to higher priced domestic chipping material. However, this could change later in the year if continental processors dip heavily into the free-buy market, but by then domestic processors may have adequate cover.

Crisp manufacturers face more challenges. Supplies that would meet specification are more limited both domestically and on the continent. With a large proportion of the crisping crop located in Yorkshire and the North West, supplies will have to be carefully managed at this point, especially as the usability of the crops left in the ground is questionable.