“It’s an unusual season. We were extremely busy at the start of the season until the U.S. Thanksgiving—especially so on our specialty items,” says Dwayne Coffin of Vanco Farms in Mount Albion, PEI., noting its specialty potatoes include creamers, small potatoes and organic potatoes. “However the timing of U.S. Thanksgiving this year has thrown it off a bit.”

He notes that the holiday is typically a week earlier and buyers order product for the holiday and then take the following week to 10 days to clean up any excess product. “With the holidays falling the way it did this year, it’s taken well into December to clean up what they had on hand. It had a bit of an impact on our December Christmas business,” says Coffin.

He says that for the short-term, supplies of specialties are adequate. 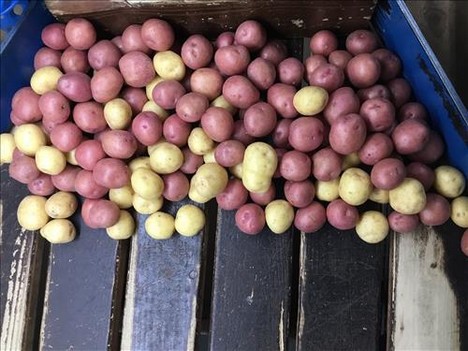 Growth on creamer potatoes
Interest in the category has grown over the years. “The creamer category, which is the high-end specialty category is still a growing category. Demand was consistently outstripping supply until the past couple of years,” says Coffin. “Now it’s leveling off and sales are still increasing but the supply has gotten closer.”

He also adds that as the season goes on, more competition has come on for specialty potatoes. “Now that product is available from other major shipping areas, we’re still getting orders but we’re probably not getting as much as we would normally at the start of the season,” he says. “We’re not seeing any decreases in our sales but we’re not really going outside of our normal channels either.”

Overall, demand has particularly grown on organic potatoes. “The shelf space at the chain stores, especially in the specialty category, has gotten much larger over the last five years,” says Coffin. “But part of what to consider in increased demand is that some major potato growing areas had a lot of harvesting challenges. So you have to consider whether this is a harvesting issue or a demand issue? I think it’s somewhere in the middle.”

Meanwhile specialty pricing has been good—and prices, which are steady, have picked up somewhat on both organic and creamers. “We’re not seeing any competition for the last couple of years and it’s maybe slightly higher because of the currency exchange rates. Canadian product can be more competitive today in the U.S. marketplace versus when the exchange rate was totally different seven to eight years ago,” he says.