Honeydews are grown and exported from multiple origins in Latin America, but the 2019 season has been off to a slow start with regard to supply.  Classic Fruit Company imports its honeydew melons from Guatemala and Honduras with Guatemala being the location of their primary growing operation.

Late and slow start to the season
The season has so far been one of small sizes and low volumes. Classic Fruit Company’s Vice-President of Sales Tom Ferguson says: “The Guatemalan season usually runs from mid-November through mid-May, but this year we have had a late and slow start. There have been some production issues in Guatemala that have caused a shortage in the early stages of the season. This is compounded with issues in the Mexican production, so the overall industry has experienced shortages going on two months now.”

The Mexican honeydew season was affected by poor weather in September – Tropical Storm Lorena. Ferguson says: “Guatemala has also dealt with weather too as colder temperatures slowed production in early December.  As we entered the season honeydew acreage was also down in Guatemala contributing to lower than normal volumes.  As an industry we have had quite a challenge in these early stages.

Fortunately, Guatemalan production will move away from the Zacapa valley to alternate growing regions in Guatemala with the Honduran season also set to start in early January. Ferguson says: “We are looking to be back on track after the holidays after moving to other growing regions. The outlook for the balance of the season is solid as Classic Fruit will have consistent supplies until at least the middle of May.” 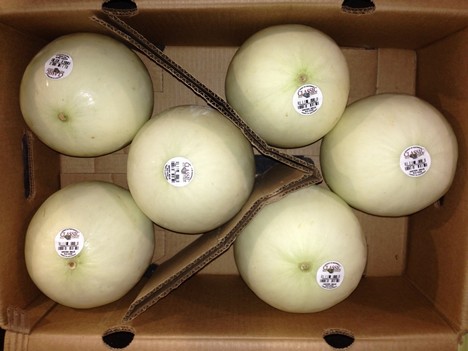 Small sizes don’t meet demand
The North American market generally demands larger sizes for the honeydew melons, but unfortunately the volumes coming out of Guatemala aren’t able to meet this demand. Ferguson says: “We have been receiving a very high percentage of smaller sizes of the honeydews. The quality has been good, but the market demand is usually centered around larger fruit such as 5s and 6s.”

He adds: “With lower volumes demand has exceeded supply which has led to higher markets. Current open market pricing levels have been $16-18 for 5s and 6s which is very good for the honeydews.”

Classic Fruit Company’s primary melon variety is the cantaloupe, which is also grown in Guatemala.  The majority of Classic Fruit’s production arrives into ports through south Florida and Los Angeles while also utilizing ports in Houston and Wilmington.